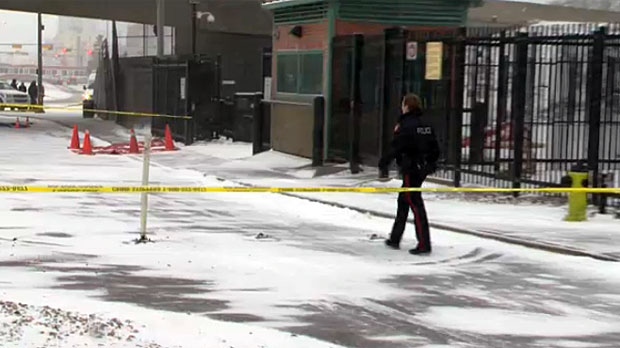 Police at the scene where John Gordon Walmsley, of Calgary was found stabbed.

Calgary police have charged a young man with second degree murder in connection to the death of Gordon Walmsley near the Drop-In Centre last week.

Police were called to an altercation on Sunday, March 17 near 4 Street and Dermot Baldwin Way S.E.

When officers arrived they found an unconscious man suffering from stab wounds.

John Gordon Walmsley, 42, of Calgary, was taken to hospital in life-threatening condition and later died from his injuries.

The CPS Homicide Unit arrested one individual in Edmonton on Friday, March 22, 2013.

A 16-year-old male from Calgary, has been charged with one count of second-degree murder and appeared in court in Calgary on Monday to answer to the charges.

Police are still looking for other individuals in relation to this incident and are asking anyone with information to call the Calgary Police Service Homicide Tip Line at 403-428-8877 or contact Crime Stoppers anonymously using any of the following methods: