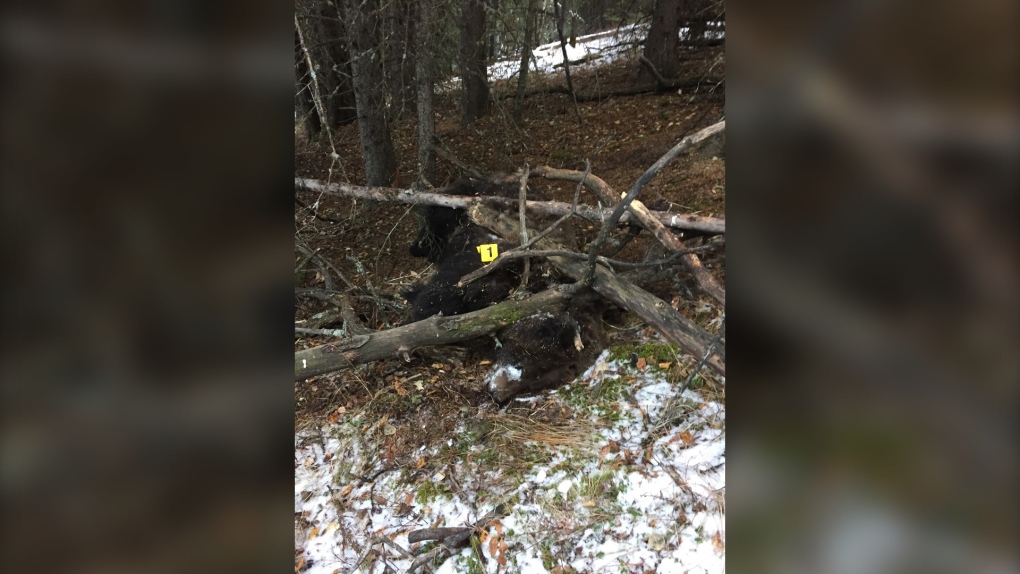 CALGARY -- Two men have been charged with multiple offences after a grizzly bear was illegally killed near a hunting camp in November 2018.

Jeffrey Hambrook and Gary Gilson were sentenced to a one-year conditional sentence, a three year hunting suspension, and a fine of $22,000 for illegally killing the grizzly bear.

Hambrook pled guilty to charges of hunting out of season, assault, and uttering threats in relation to property.

Gilson pled guilty to unlawful possession of wildlife, theft under $5,000, and uttering threats in relation to property.

On Nov. 5, 2018, Alberta fish and wildlife officers received a report that a grizzly bear had been killed by two men at a hunting camp location in the Indian Graves Area, west of highway 22.

The citizen who made the report was also assaulted by the two individuals after they realized a report had been made.

Following an investigation, officers determined that, two days prior, the grizzly bear had fed on the hunter's low hanging deer carcasses on their meat pole structure, 50 yards from their hunting camp. The following morning, the men removed one of the deer and secured the other in a higher position.

Later that evening, the bear returned and attempted to reach the remaining deer. The men watched the bear for three hours before deciding to shoot and kill it, using a motion sensor spotlight to see the bear's body.

Nearby campers asked the men about the shot, and were told it was a warning shot.

Witnesses found the dead bear the following morning and reported it to fish and wildlife. While collecting photo evidence, the witness was assaulted by the two men.

They grabbed the witness' phone and threatened him with an axe in an attempt to get his passcode. Other campers intervened and convinced the men to leave the witness alone.

When officers arrived, one of the men admitted to the killing and led officers to the carcass, which was dumped in a drainage area and covered with branches.

Analysis showed the bullet entered through the bear's left hind quarter and exited through the right shoulder, which shows the bear was facing away from the men when it was shot.

Photo and video evidence also showed that the bear was not displaying any aggressive behavior, and it did not appear that the men made any attempt to scare the bear away from the area.

Fish and wildlife investigate anytime a grizzly bear is put down in Alberta, as they are a threatened species.

Anyone who witnesses poaching or illegal hunting is encouraged to report it to fish and wildlife.