Calgary police say they have a suspect in custody following four violent incidents in the downtown core early Friday morning.

The arrest came after a quartet of incidents the police characterized as random attacks at different downtown locations that started at 3:15 a.m. and continued through the early hours of the morning.

No other details about the suspect were released.

"We continue to believe these attacks were random and we have not identified a clear motive,” Supt. Cliff O'Brien said. “There is no common theme among the victims that investigators have zeroed in on at this time.”

The first victim used a emergency button at the Fourth Street CTrain Station to call for help at around 3:15 a.m. saying he had been slashed by a machete.

About 90 minutes later, a second victim was found unconscious in a bus shelter at Sixth Avenue and First Street S.W.

The victims were taken to hospital in serious condition and in life-threatening condition respectively. O'Brien said Friday afternoon that both men had undergone surgery and remained in hospital.

Also at around 4 a.m., police say a third victim was found in the 1000 block of Sixth Avenue S.W. He said he had been knocked unconscious and woke up a short time later.

Police say the man had minor injuries and didn't need to be taken to hospital.

The fourth victim was found at around the same time near the Peace Bridge. Police said he was taken to hospital with injuries to his hand, but has since been released.

"There are still some victims that we still have to interview,"  O'Brien said

The police investigation caused CTrain service in the downtown core to be disrupted for several hours.

O'Brien said the investigation was “dynamic” and a “resource-intensive time period” for the Calgary Police Service.

"During this incident we had 21 patrol units, we had HAWCS, we had canine units, as well as investigative units, as well as surveillance units … who were all working in a coordinated way to attempt to locate the suspect," O'Brien said.

"If an immediate public warning was needed for a prolonged period of time in relation to this incident, we certainly would have made every effort to get this information out.

"There are legitimate questions, as well, about us not releasing further details on the suspect. This was held back in an attempt for our officers across the city to make headway and to follow up on investigative leads that were coming in as well as collect evidence from those multiple scenes and from across several downtown blocks,” O'Brien added.

"After the initial series of incidents there was no additional indicators that further attacks were occurring and it is believed, based on the evidence, that the suspect had fled.”

Police are in the process of reviewing CCTV footage. 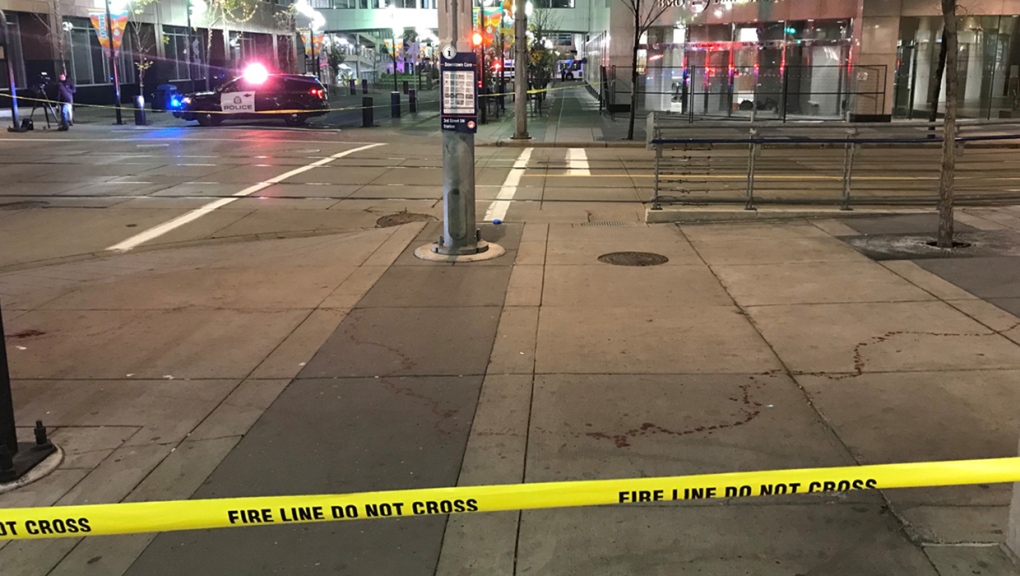 The intersection of Seventh Avenue and Third Street S.W. was closed to vehicles and pedestrians following a pair of Friday morning attacks that sent two men to hospital.

CTV Calgary spoke with several people who live in the area of the attacks, who say pockets of homeless people are getting pushed out of the neighbourhood and have nowhere to sleep.

“There’s a lot of drinking and fighting and women being attacked," Andie Wolf Leg said. "You can hear them screaming and crying in the night on the CTrain when I go home.

“I come from the street so I’m a lot more calm about it, but I don’t feel safe. The police department needs to hire Indigenous mental health workers.”

Wolf Leg added that a police station should be brought back to the downtown core in an effort to prevent further violent incidents like this from happening.

“I prefer the police to be on the downtown streets, to have a street station downtown. If all they have is transit police patrolling it’s just not a deterrence anymore.”

Others like Yuzhi Tian agreed that the downtown needs better enforcement.

“Just in case something like this happens, we need first responders here so they can come as soon as possible. It’s just really scary, because what if someone gets injured really badly and dies?" said Tian.

Anthony Jacobs was walking near the crime scene Friday morning. He told CTV News he has never seen such extreme violence in Calgary during his 20 years living in the city.

“I think this is alarming. I’m not blaming anybody but I must say that the city, people, community, and police need to come together to find a solution,” he said.

In response to calls for a downtown police station, O'Brien said those kinds of decisions "are not made by the police service."

"Those are decisions made by council and the police commission," he said.

He said even if Friday's attacks were to have occurred elsewhere in the city, the approach they used would have been the same.