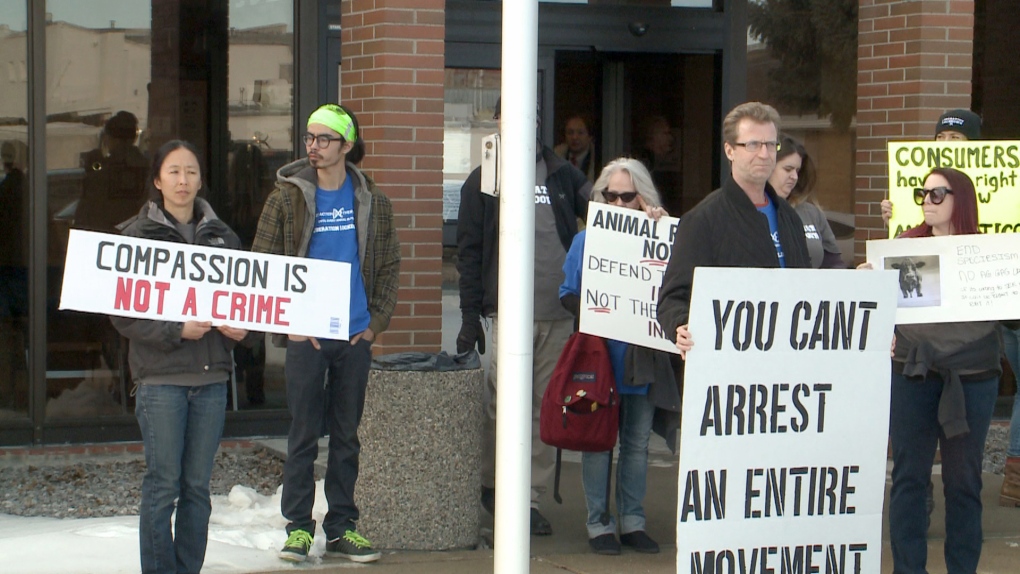 Protesters are seen outside the Lethbridge courthouse in December. (File)

LETHBRIDGE -- Three people charged in connection with a September protest at a southern Alberta turkey farm made a brief court appearance Wednesday in Fort Macleod.

Maxwell Mah, 46, of Edmonton, Claire Buchanan, 28, of Calgary, and Kenadi Herbert, 24, of Pincher Creek are each facing one count of break and enter to commit mischief.

None of the accused appeared in person, but were represented by a lawyer.

They asked for the matters to be adjourned for one month, so they could gather information and speak with their clients.

The three were among about 90 demonstrators who held a protest at a turkey farm owned by the Jumbo Valley Hutterite Colony, near Fort Macleod. Some of the protesters locked themselves into a turkey barn to take photographs and raise awareness about conditions at the farm.

The demonstration was organized by a group known as Liberation Lockdown.

The protest got the attention of the farming industry and the Alberta government, which last November radically overhauled the province's trespass laws, increasing the maximum fine from $2,000 for a first offence, up to $200,000 and even jail time.

The legislation was also changed to make it an offence to be on property if permission is obtained by false pretenses. Animal rights groups have dubbed Bill 27 the "Ag Gag Law," and maintain it could affect those trying to expose wrongdoing or poor conditions on farms.

A previous court appearance in December attracted about a dozen supporters and protestors.  None were on hand Wednesday.

A 16-year old woman was also charged following the September protest, but her case is being dealt with separately in youth court.