45% of Canadians plan to ask holiday guests to get a COVID-19 test: Survey

With little still known about the new Omicron variant regarding its transmissibility and the severity of disease, there are some doctors who would like to see rapid tests more available to all Albertans.

Dr. Raj Bhardwaj would like to see the tests be free and available to avoid a surge in COVID-19 cases over the holidays.

“This isn’t Christmas of 12 months ago when we had no vaccines, we have some layers of protection which give people this idea that we can gather safely and rapid tests are just another layer of protection that allow us to gather safely. So, I kind of feel like a safe Christmas is being held back from us and I don’t want to go another Christmas without seeing family in person,” he says.

“We’re running out of time and will be stuck reacting (again) instead of being proactive for once,” Bhardwaj said in a Tweet.

Rapid tests should really be *free* & available if we want to keep the holiday surge in cases to a minimum.
We’re running out of time, and will be stuck reacting (again) instead of being proactive for once. https://t.co/GSi9PSKZDz

Dr. Joe Vipond, meanwhile, is calling on the federal government to provide a “respirator-style mask” to all Canadians once a week free of charge and seven rapid tests per household, per week.

“OK Canada. I think we need to double down, on everything,” he wrote on Twitter. “Let's use collective action to keep us safe. #BreatheandTestFree.”

OK Canada. I think we need to double down, on everything. I call on the feds to provide a respirator-style mask free of charge, to each Canadian, each week. And seven free rapid tests/week per household. Let's use collective action to keep us safe. #BreatheandTestFree

Abdul Kanji is the pharmacist at the Corner Drug Store in East Village and also agrees it would be beneficial for people to have access to the tests at home.

“Rapid tests are quite easy to do so, that would be a good thing to have so you don’t miss work and at the same time you keep the family protected at home,” he says. “It would be beneficial I supposed rather than missing school they take a rapid tests, if it’s negative than they go to school so I see good things in that perspective.”

In Alberta, employers and service providers can apply to receive free rapid testing kits through the government’s rapid testing program.

They’re also available for students and staff in K-to-6 schools dealing with an outbreak. The voluntary program has only been used a handful of times between Calgary’s two major school boards.

The province has given out six million kits to date and say there is ample supply which Dr. Bhardwaj finds frustrating.

He says if a supply shortage isn’t the issue than Albertans deserve to know why access isn’t being expanded.

“The federal government acquired millions of these rapid tests and distributed them to the provinces and Alberta for the most part has been sitting on them and I’d really like to understand why,” he says. “A lot of the Atlantic provinces are doing this, Saskatchewan is doing this and a lot of places in Europe they’ll give you tests for free and ask you to test yourself every three days, so it’s doable we’re not reinventing the wheel here it’s just deciding that hmmm, Alberta is a really good place to use a wheel.”

The province says the focus is on providing tests to high risk populations, workplaces and essential services. 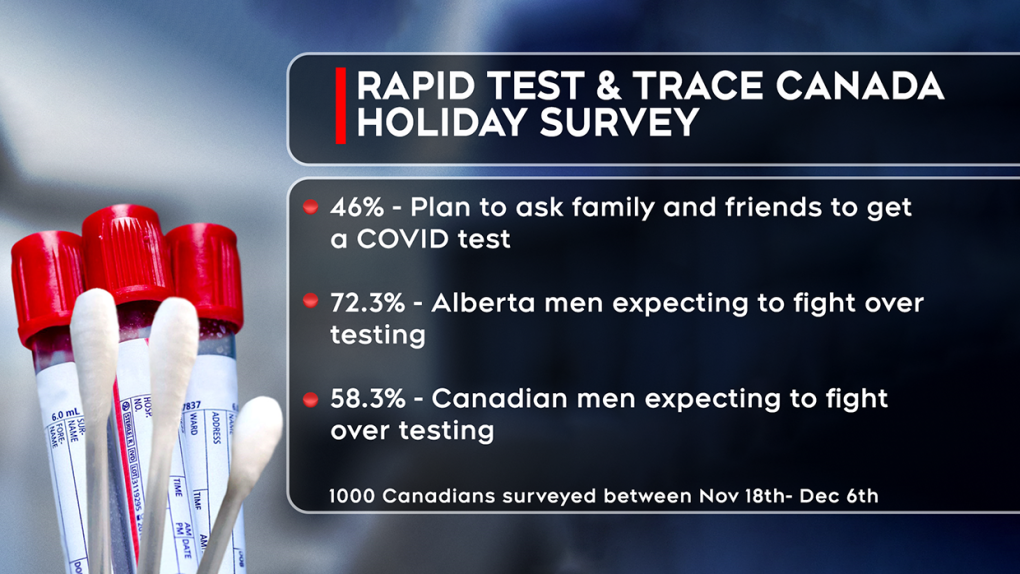 Holiday survey of Canadians during COVID

OVER A WEEK OF OMICRON

It’s been more than one week now since the first cases of the Omicron COVID-19 variant were detected in Canada.

On Monday, Dr. Deena Hinshaw said there were eight new cases of the Omicron variant detected in Alberta since Dec. 3, bringing the total to 11 in the province.

COVID-19 testing is top of mind for many Canadians planning to celebrate with loved ones over the holiday.

According to a new online survey by Rapid Test and Trace Canada, a large retailer of rapid COVID tests in Canada, 46 per cent of Canadians plan to ask family and friends to get tested before a holiday visit.

In Alberta, 72.3 percent of men surveyed expect there to be an argument over asking someone to be tested for a gathering which is well above the national average of 58.3 per cent.

Fifty-three percent of people surveyed also said they plan to limit visits due to COVID concerns this holiday season.

The survey was conducted online of some 1000 Canadians between November 18th and December 6th.