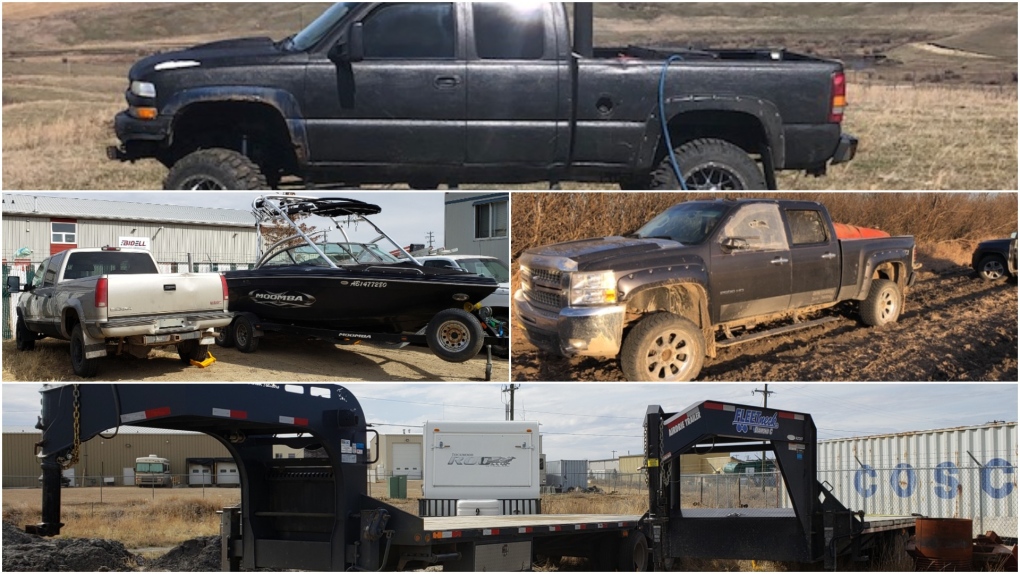 Police say the vehicles were stolen from a number of jurisdictions throughout the province. (Supplied)

CARBON, ALTA. -- Authorities in southern Alberta have arrested two people at a property in Carbon, Alta., and are looking for third in connection with an operation that was launched into property crime late last month.

Police, along with other units, were called to execute a search warrant at a property in the community located approximately an hour northeast of Calgary on April 28.

A number of items were recovered, including:

Starr Bowman, 32, and Devon Tanner, 34, are each charged with possession of a motor vehicle over $5,000, three counts of possession of stolen property and four counts of failing to comply with a court order.

Bowman is expected in court on May 19, while Tanner has a court date set for May 15.

A third suspect, 34-year-old Mitchell Engler, is still being sought by police. He is charged with possession of a motor vehicle over $5,000.

Police say Engler, who is also wanted on warrants out of Blackfalds and Sundre, may be armed and advise the public against approaching him. Instead, people are being told to contact police immediately if he is seen.

Officials say the seizure of the stolen property, believed to have been taken from several communities including Sherwood Park, Airdrie, Calgary, Three Hills, Carstairs and Red Deer, comes as a relief.

"It’s nice to be able to return all this property to its owners and we thank the alert citizens who notified us about suspicious activity," said Sgt. Gary MacLaren of the Southern Alberta District Crime Reduction Unit in a release. "As long as criminals remain active, our unit remains active and will follow up on intelligence we gather from various different sources."