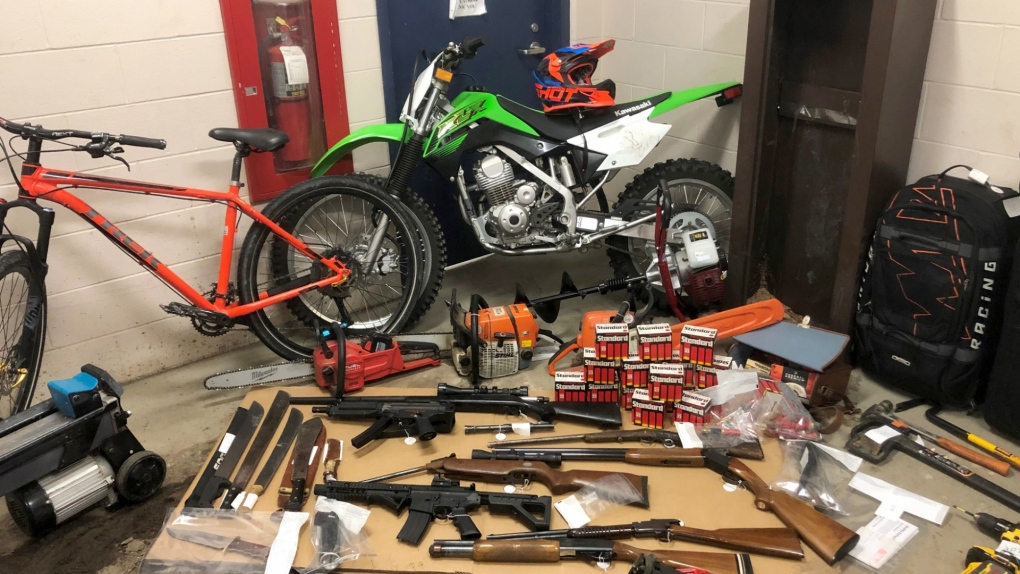 Some of the suspected stolen property recovered by RCMP. (RCMP handout)

The investigation began Feb. 18 when RCMP received a report of an attempted home invasion near downtown Innisfail — about 120 kilometres north of Calgary.

Two suspects were identified by police and officers went to a property in Red Deer County the next day to make arrests.

"One was arrested without incident and the second fled in a Ford F350, with two other occupants," police said in a release.

"A pursuit ensued, and efforts were made to deploy tire deflation devices, but they were not successful."

The Ford F350, which had been reported stolen out of Saskatchewan, travelled to a location near Pigeon Lake, where police say three occupants were picked up by a second Ford pickup truck.

That truck was under observation as it travelled back into Red Deer and five occupants were eventually arrested at two different locations, with the assistance of the Red Deer City RCMP, Innisfail Integrated Traffic Unit and RCMP Police Dog Services.

A search warrant was then executed at the property in Red Deer County on Feb. 20, where RCMP seized a number of suspected stolen items, including:

The second Ford truck was examined by the Calgary Auto Theft Unit which found the VIN number to be cloned from a vehicle that was reported stolen from a ranch near Strathmore three years ago.

Gary Auvigne, 45, is facing more than 20 charges, including:

Thomas Larkin, 41, is facing 17 charges, including:

Katherine Young, 29, and Thomas Foshay, 36, are both charged with possession of a stolen vehicle and possession of break-in tools.

Kameryne Boyd, 21, is charged with possession of break in tools, fraudulent concealment and possession of a weapon for a dangerous purpose.

Young and Foshay were released on bail with future court dates pending.