CALGARY -- Calgary senior Bobbie Gardiner says she's been using Kijiji for years, selling stuff she no longer uses to supplement her income. She never had a problem until Wednesday night, and now she says she's out thousands.

“I am so upset about it,” said the retired grandmother, in an interview with CTV News.

“I feel like I’ve been violated. It's my home, to have someone come her and do that to me.”

Several weeks a ago, Gardiner posted an on Kijiji, offering to sell a diamond ring for $3,000.

She says a family member had bought the ring a few years earlier for $5,000 but it had rarely been worn. 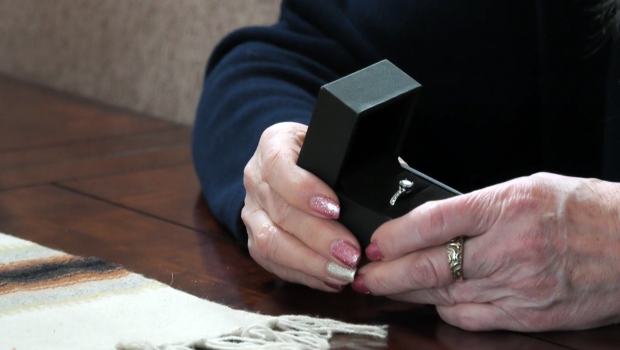 This week, a potential buyer contacted her.

“I had talked to him on the phone,” she says, continuing the story. “We were going back and forth and he seemed really nice...he said (the ring) would be a surprise for his girlfriend’s birthday.”

The man, who said his name was “Christian” came over to examine the ring.

While looking at it, he asked Gardiner if she had a jewelers loupe, which is a small magnifying glass used to inspect gems.

She was home alone and went upstairs to get one.

She says while she was doing that, “Christian” grabbed her wallet off the table.

She says he also switched the diamond ring with a similar-looking piece of costume jewelry.

She says when she came back downstairs, “Christian” said he would buy the ring but needed to step out to get cash.

Moments after he left, Gardiner says she realized the ring left behind was a fake.

“That’s the level these people are now going to. They will use diversion tactics.” said Cst. Mark Smith with the Calgary Police Service.

Smith advised that transactions such as Gardiner's should be conducted in front of witnesses or cameras.

“If you can go to a public place where there is CCTV, if something does happen then the police can go through that. “ Smith said. “Another thing you can do before showing the items to the person buying is ask for their identification.”

Gardiner did capture part of the alleged thief’s face on her front door security camera.

She’s sharing that image online, hoping someone will recognize him.

“I just want people to be careful,“ Gardiner says, “Be aware if you have someone coming into the house. Be careful because you don’t know who you can trust these days.”