'A random shooting': Calgary woman startled after finding bullet in her kitchen cupboard 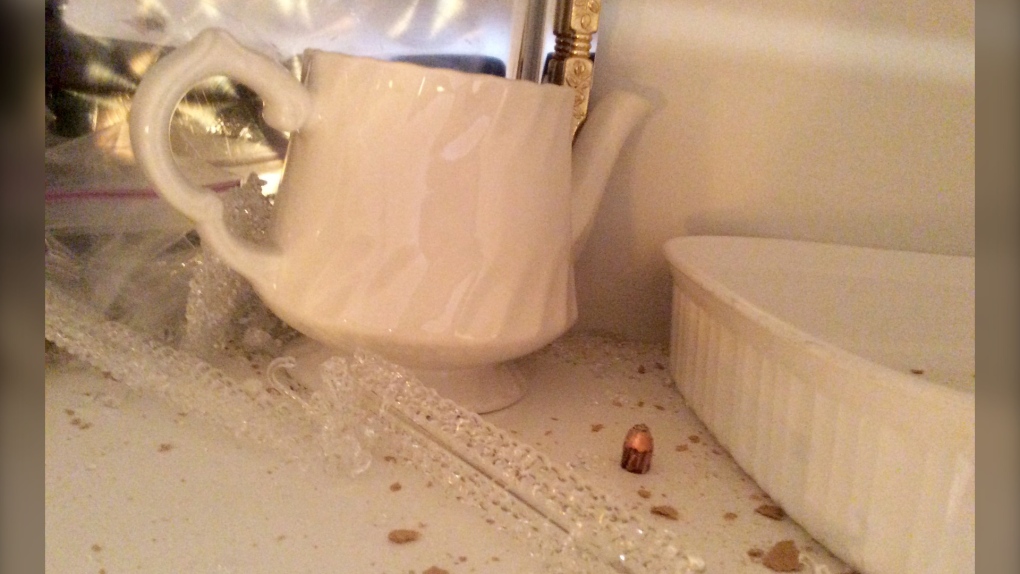 A woman woke up to find this bullet in her cupboard after a shooting in northwest Calgary.(Photo supplied)

CALGARY -- Calgary police are looking for suspects after a frightening incident that took place early Thursday.

Officials say a woman called them at about 4:40 a.m. and said she was awoken by the sound of a gunshot.

When officers responded to the scene, in the 200 block of Panora Way N.W., the victim told them she found debris on her floor and a bullet in her kitchen cupboard.

Celine Mini, the homeowner, has lived in the area for about five years and said the incident was quite a shock to her.

"All of a sudden I heard a 'bang' at about 3 o'clock this morning and I thought that maybe a picture fell," she told CTV News. "I figured I would take a peek at what happened."

When she got down to the kitchen, she found debris scattered all over the floor..

"I went to get my step stool and stepped up and looked at (the cupboard) and saw there was a hole in it. I decided to lift up the cupboard and look inside and discovered there was a bullet there."

Mini soon discovered the bullet had punched through the wall at the back of her house and that's when she called 911.

Once police arrived, she said they looked all over both hers and her neighbour's yards for any sort of evidence that could lead them to identify a suspect.

"They figure it could have just been a random shooting," Mini said. "That somebody was just driving along Stoney (Trail) and just decided to shoot their gun. It's just a guessing thing at the moment."

Police believe only one shot was fired at the home and saidd no one was injured in the incident.