'A shame that a lot of it is gone': 100 year old Lethbridge garage destroyed by fire

'A shame that a lot of it is gone': 100 year old Lethbridge garage destroyed by fire 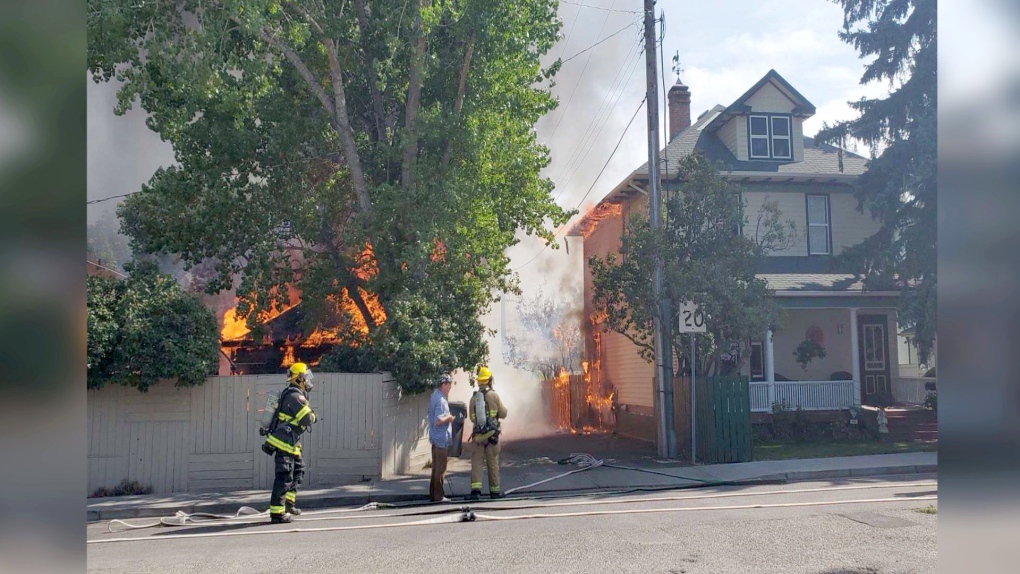 Two garages and a home were damaged by fire over the weekend. (Courtesy Mick Johnston)
CALGARY -

An investigation is underway into the cause of a weekend fire that destroyed one garage, damaged a second, and melted the siding on a nearby house.

Fire crews from three stations responded to a report of a structure fire in the 1200 block of Fourth Avenue S. on Sunday afternoon.

“I heard a loud noise, sounded like an explosion,” said Dave Heatherington, an off-duty firefighter who discovered his neighbour’s garage ablaze when he went out to his backyard to investigate.

Crews arrived on scene and were met with visible smoke and flames coming from a single car garage.

Neighbouring homes on the south side of Fourth Avenue were evacuated as a precautionary measure.

Heatherington — who is a platoon-chief with Lethbridge Fire and EMS — briefly joined in the firefighting effort by helping to connect a hose from the hydrant to one of the fire trucks.

The single car garage where the fire started was completely levelled in about 30 minutes.

Owner Jim Day said the structure was about 100 years old and had originally been used as a stable when his house was built in 1909.

“This is what’s lucky,” added Day, “My wife drove her car out and went shopping less than 20 minutes before the fire started.”

Platoon Chief Shawn Folk said it was fortunate that the wind was not blowing from the west.

“We had a little bit of a north wind,” said Folk. “It pushed toward the south side and caught a house just across the alley.”

The siding on the house was left scorched and blistered by the heat.

Day said the worst part was the damage the fire caused to his neighbours, including Heatherington’s garage next door.

“I know Dave and his brother-in-law have put in two years building that beautiful garage,” said Day. “It’s a shame that a lot of it is gone.”

Heatherington said it was not a big deal.

“It’s all just stuff that can be replaced,” he said, pointing out no one was injured and everyone managed to get their pets out safely.