'Aaron goes wherever we go': Friends carry man in wheelchair to view waterfall 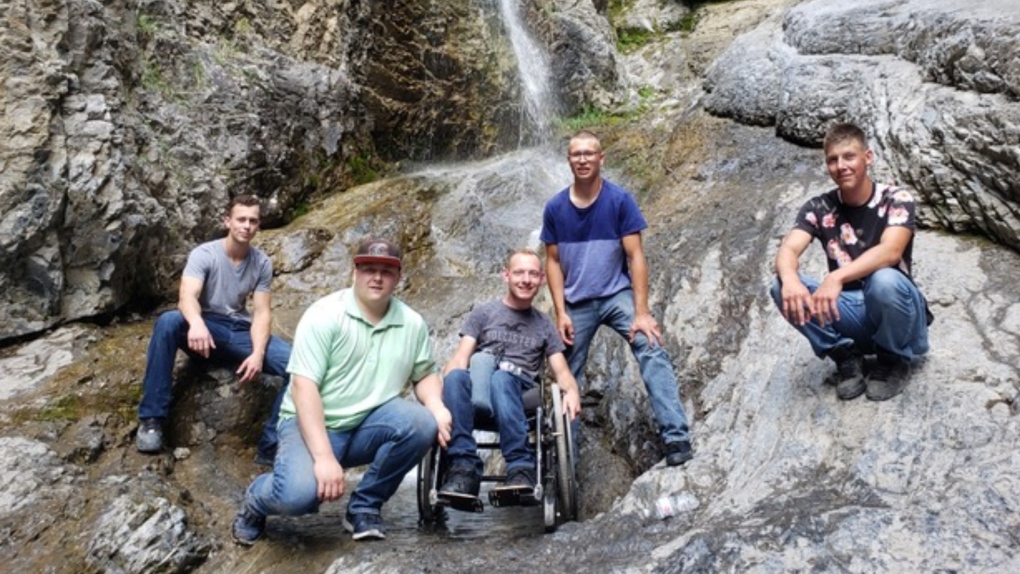 CALGARY -- A group of young men from the Edmonton area inspired many by recently carrying their friend up the Grotto Canyon trail near Canmore, Alta. to view a waterfall.

Aaron Friesen, who has spastic bilateral cerebral palsy as a result of a lack of oxygen at birth, has been in a wheelchair his whole life.

"This condition affects my whole body, but mainly my legs," said the 21-year-old. "I have been in a wheelchair for my whole life. Some people like to give me pity or feel that they should. My family and friends know that that's not what I want, though. What I want is to be treated like I belong and they do a great job of that."

On Sunday, Aug. 2, the group of five friends — Friesen, Willy Peters, Cornie Klassen, Benny Thiesen and Avlin Wolf — set off on the four kilometre hike to the waterfall and back on a route that included rough and steep terrain.

"At first, the guys just took turns using brute force and tried to push my chair up that mountain," recounted Friesen. "It quickly became very evident that this wasn’t going to work, especially now that my wheelchair was hobbling on three tires. We were going to have to do this another way."

After struggling to push his wheelchair up the trail, Willy Peters came up with the idea to stick logs underneath the wheelchair and carry Aaron.

"We just wanted to see the waterfall, and Aaron goes wherever we go," said Peters.

"I will admit, I was a little nervous," said Friesen. "I always am when we do these hiking trips. It's so much fun, though. The laughter, adrenaline and feeling of accomplishment you get after completing a task like this is unreal!

"I mean, I feel like there haven't been many wheelchairs up to that waterfall."

The friends, who met through different church events and outings in Edmonton, have known each other for several years.

"I would say we're pretty close as a group of guys," said Alvin Wolf. "We've known each other for a long time, and we've done some pretty crazy stuff. Our friendship is pretty awesome, and it’s definitely noticeable when one of us is missing."

The "boys weekend" took place in Calgary, and the hike was a spontaneous decision that turned into an act of inspiration for onlookers.

"Every passing person seemed to have a look of awe, inspiration and probably a little bit of shock to see a wheelchair on a trail like this," said Friesen. "A lot of people made comments about how awesome and inspiring this was and telling me that I have incredible friends. They are not wrong when they say this."

"My friends are amazing! I thank God so much for providing me with such a great support group that has helped me gain the confidence, courage and strength needed to live a fulfilling life."

The act captured the attention of Mary Dorchester who was also at Grotto Canyon on Sunday Aug. 2. Dorchester posted a photo of the young men on her Facebook page hoping to identify them and get their story out to the public.

"These young men totally need super attention to what kind hearts they have," Dorchester wrote in her Facebook post.

The post received over 300 comments and 2,000 likes within two days.