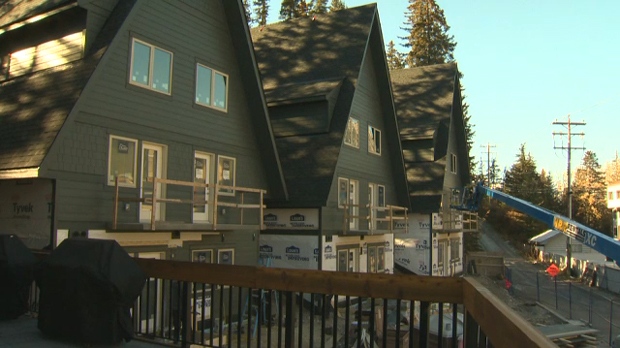 Ti'nu, an affordable housing complex in Banff, has 131 units including eight barrier-free suites

The ribbon has been cut on a 131-unit apartment complex in the Town of Banff that is expected to alleviate some of the housing pressures on the community that is currently experiencing a zero per cent vacancy rate.

The Ti’nu complex, situated on Coyote Lane, cost approximately $24 million and was jointly funded by the Town of Banff and the Government of Alberta. The land for the project was purchased from Parks Canada for an undisclosed amount but the mayor of Banff says the price was roughly 85 per cent less than market value.

“The Town of Banff has had housing challenges for decades. In the last few years, we have had a zero per cent vacancy for rental accommodation and,  since I’ve been mayor, housing has been a huge priority for council. We started to work diligently on how we could actually create housing that would serve our service sector and be affordable.”

According to Sorensen, 56 per cent of Banff’s population is under the age of 35 and the town’s average income is below the provincial average.  “We have a great need to accommodate people in an affordable way. We depend very much on a younger generation to operate the town. They are the people who work in the tourism industry. We need to make sure that everybody’s comfortably housed.”

The first tenants began moving into the complex in the summer while some of the units have yet to be finished. The residents include a mix of singles, couples, families and seniors.

Sharon Oakley, the Town of Banff’s manager of housing sustainability, says the town received 28 request for proposals before selecting the current design. “It was so creative in its use of land and the transitioning from these three buildings to three A-frames that go into a single family development,” said Oakley. “Brilliant use of space.”

A housing needs study conducted in 2012 found that the majority of households in Banff were paying 30 per cent or more of their income on housing. Oakley says additional housing projects will certainly be built in the coming years as needs are identified.

With files from CTV’s Kevin Fleming