CALGARY -- An Airdrie couple say they are frustrated after their condo board decided to evict their two-year-old cockapoo.

"What I don’t understand is how people can go in your private home and tell you what you can have and what you can’t have anymore," said Gerald Clayton.

"We pay for this house, but they keep coming back and saying this is Iron Horse property. Well if it’s their property, then why am I paying taxes?"

For the past 18 years, the Claytons own the condo unit at Iron Horse Condominiums on Airdrie's west side.

Charlie is the third dog the Claytons have owned while living there, and they say the dog serves as an emotional support animal for Gerald’s wife.

"It makes me get up, otherwise I would still be in bed, not moving," said Brenda Clayton.

Brenda lost her youngest son at the age of 37 to a heart attack in August 2017. A month later, their second dog was diagnosed with cancer and needed to be put down.

They replaced that dog with Charlie.

The problem with Charlie living in the building stems from a 2015 bylaw adopted by the condo board that banned dogs from being in any unit. The bylaw change did not apply to dogs that already lived in the building before the change — those pets were considered grandfathered in.

According to court documents, the Claytons bought Charlie in February 2018. He was not registered with Astoria Asset Management Ltd., which manages the property.

Four months later, the condo board sent a letter to the couple saying the dog must be removed, as it violated their pet bylaw.

Clayton said they believed as dog owners, they would be the ones grandfathered in and not the dogs. They also said they were never notified of the new bylaw, however the board said written letters were sent out to unit owners. 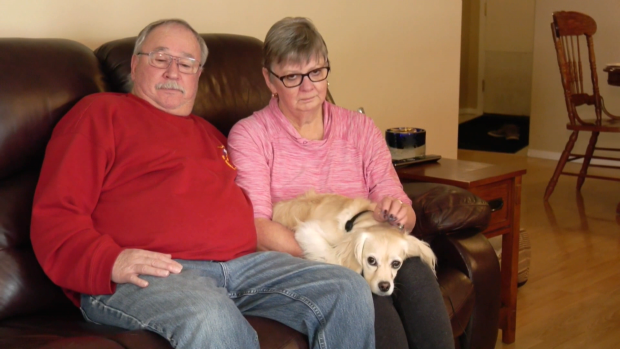 The Court of Queen's Bench decision issued in November sided with the condo board saying it was a case of misunderstanding by the condo owners.

The judge said "the court is very sympathetic to the Claytons' situation," but ruled in favour of the board, saying Charlie needs to be out of the unit by Feb. 29, 2020.

Fighting the case in court cost the couple close to $27,000 in legal fees.

"It took a lot out of our savings account for this, but we would go all out to save our dog, our son," said Gerald.

Charlie is registered as an emotional support dog under the Assistance Dogs of America organization, which is not included under Alberta’s service dog act.

In the decision the judge said the Claytons are able to pursue a proper designation of Charlie to become a service dog and submit it to the board for consideration.

According to Diane Carter, a spokesperson for Community and Social Services, qualified service dogs in Alberta are the only dogs with guaranteed public access rights. Emotional support dogs are not accredited in the province.

"(Service dogs)are trained to support people who have been diagnosed with a disability and, as part of this process, dogs undergo rigorous training to ensure they do not pose a risk to people or property," Carter said.

Brenda said that will not happen.

The Claytons said they don’t plan on moving but will relocate Charlie to their fifth-wheel trailer on their family’s acreage.

CTV News reached out to the property manager for comment, but have yet to hear back.