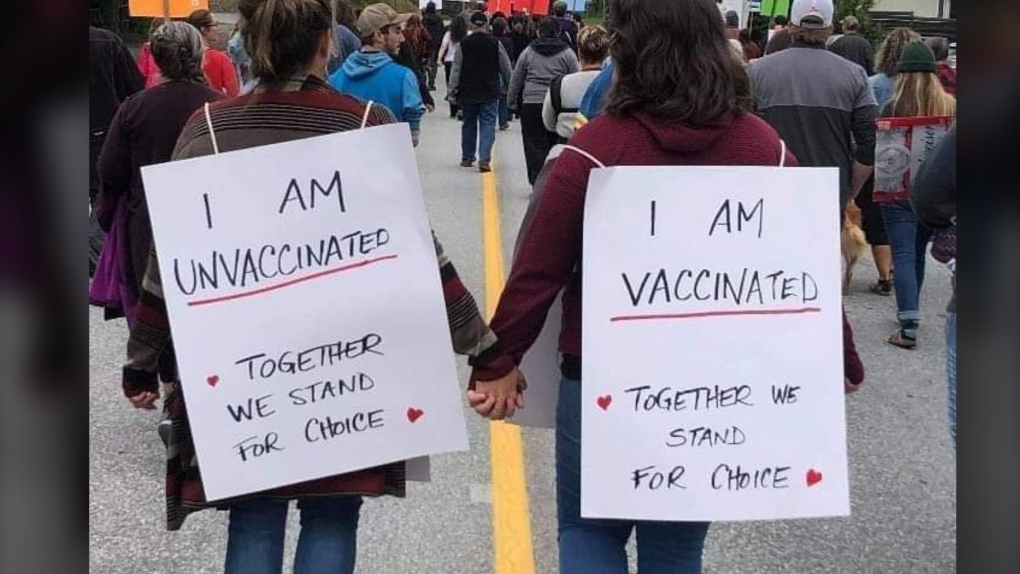 The Facebook page of Airdrie-East MLA Angela Pitt was updated Wednesday night with an image championing freedom of vaccination choice. Now, the NDP is calling for her removal from caucus.

The image, which was posted without comment nor credit to a photographer, appears to be from an anti-vaccine card rally held in Nakusp, B.C. on Sept. 1.

The photo shows two people walking hand-in-hand while wearing sandwich boards indicating the fact one had been vaccinated while the other had not been immunized. Both signs included the phrase 'together we stand for choice'.

There is no indication that the UCP MLA attended the rally that occurred on the same day as Alberta's 116th birthday, an occasion Pitt noted and celebrated on her Facebook page.

Vaccines are not mandated in Alberta, but select businesses have announced their plans to only serve only fully vaccinated clientele. The list of organizations include professional sports teams, restaurants and pubs.

Under Premier Jason Kenney, the UCP government has been strongly encouraging every eligible Alberta to be vaccinated, though it removed mandatory vaccination from provincial legislation. However, key employers in the province, including Alberta Health Services and WestJet, have now mandated vaccines for its workers.

In the spring, Pitt posted on social media she intended to be vaccinated.

CTV News has requested comment from Pitt regarding the Facebook photo, but as of early Friday afternoon, she has not responded.

David Shepherd, the NDP critic for health, is calling for Pitt's removal from the government caucus for "undermining Alberta's vaccination efforts on social media."

Pitt is not the lone Airdrie-area UCP MLA to make social media posts that appear to be at odds with government policy.

Earlier this week, Airdrie-Cochrane MLA Peter Guthrie issued an apology letter to his constituents where he apologized for the province's reintroduction of public health restrictions after the provincial government declared earlier this summer that Alberta would be 'Open for Summer' and 'Open for Good'.

In his letter, Guthrie accused the province of taking a "disparaging and accusatory tone" toward Albertans who elected not to be vaccinated for whatever reason. Guthrie confirms he has been immunized but supports the right of individuals to choose.

A driver who struck and killed a woman and her three young daughters in Brampton, Ont., nearly two years ago is being sentenced to 17 years behind bars.

Canadians welcome Prince Charles and his wife Camilla, the Duchess of Cornwall, as they embark on a three-day, travel-filled visit starting Tuesday. Between what senior government officials, Canadian Heritage, Rideau Hall and Clarence House have released, here's everything we know about the royal tour and its itinerary.

The isolated state is one of only two countries yet to begin a vaccination campaign and, until last week, had insisted it was COVID-19-free.

Amber Heard testifies Johnny Depp assaulted her on their honeymoon

'Aquaman' actor Amber Heard told jurors on Monday that Johnny Depp slammed her against a wall and wrapped a shirt around her neck during their 2015 honeymoon on the Orient Express.