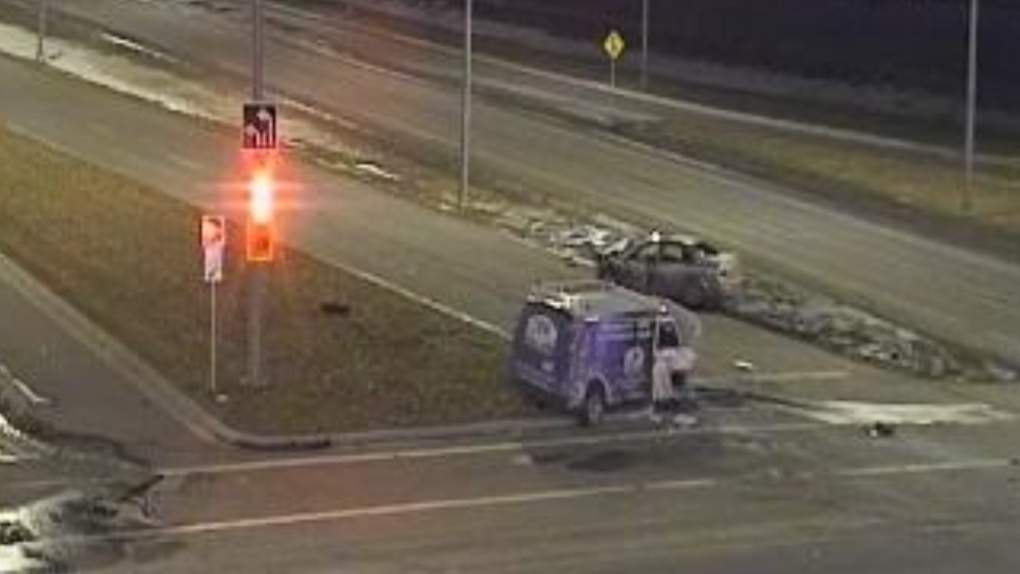 A damaged van and a car at the intersection of Metis Trail and Airport Trail N.E. Friday morning following a crash that sent two people to hospital. (Twitter/@YYCTransport)

The intersection of Métis Trail and Airport Trail was closed to traffic early Friday morning, following a crash that sent one person to hospital.

A Chevrolet Express van and a Hyundai Sonata collided at the northeast intersection around 1:40 a.m.

Police say it's believed the Hyundai, travelling north on Métis Trail, struck the passenger side of the Chevrolet, which was travelling east on Airport Trail.

The Chevrolet's driver, a 39-year-old man, was ejected onto the roadway, suffering serious injuries, police say.

EMS officials confirmed earlier Friday that one person had been taken to hospital in critical, life-threatening condition.

According to police, the Chevrolet's driver was still in hospital as of Friday afternoon.

There were two people in the Hyundai at the time, a 22-year-old man and a 33-year-old man, police say.

Both suffered minor injuries that were treated at the scene.

Police say speed, traffic signal violations and alcohol are being looked at as factors in the incident as the investigation continues.

Police are asking anyone with information or dash cam footage to give them a call at 403-266-1234, or contact Crime Stoppers anonymously by calling 1-800-222-8477, visiting calgarycrimestoppers.org online or through the P3 Tips app.