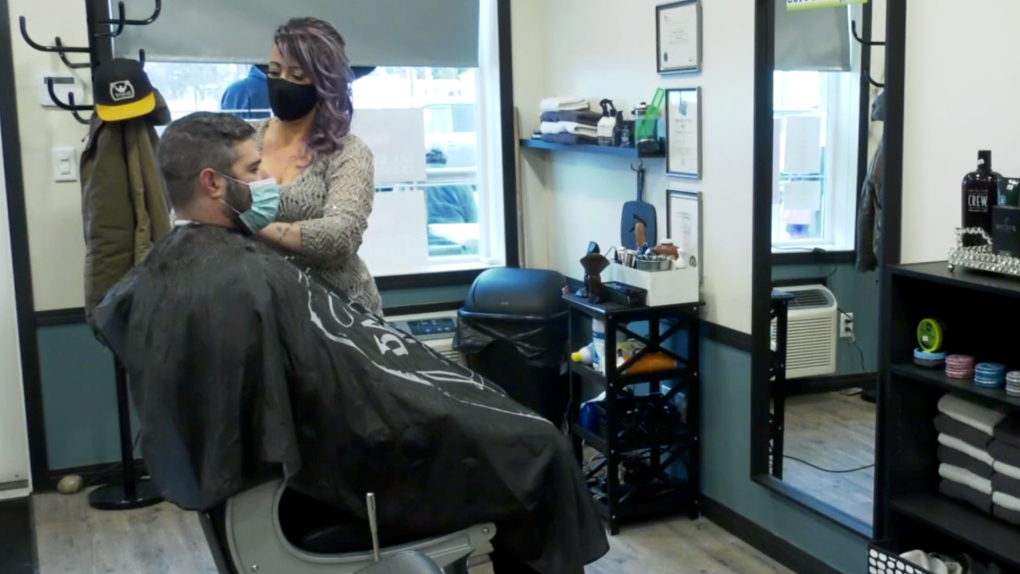 Natalie Klein, co-owner of Bladez 2 Fadez in Innisfail, Alta., serves a client in the barbershop on Jan. 12

CALGARY -- The owners of a barbershop in Innisfail, Alta. have halted haircuts once again after temporarily reopening to customers in defiance of the ongoing public health order.

Bladez to Fadez began offering haircuts on Tuesday, contravening the province's mandated closure of all personal service businesses in Alberta until at least Jan. 21.

According to co-owner Natalie Klein, the niece of late premier Ralph Klein, Alberta Health threatened fines of up to $5,000 per day against the shop on Tuesday.

The barbershop responded by reopening on Wednesday under the guise of being a pet grooming business that might be willing to cut human hair, as the province had not ordered the closure of animal salons.

On Thursday, Klein told CTV News the shop would not be taking any salon customers, and would be "regrouping" to focus on its next steps and to receive legal advice.

RCMP officials confirm tickets have been issued to the owners of Bladez 2 Fadez —Klein and her husband Yanik Brazeau — on behalf of Alberta Health. The violations included the removal of a closure notice and contravening the chief medical of health's order.

The owners will be required to appear in court in March.

Klein says the shop closed in accordance with the original public health order that went into effect on Dec. 13, 2020 and were expected to remain in place for four weeks, but she was unwilling to keep the business closed when the province extended the mandated closure to at least Jan. 21.

The barbershop's owners are not alone in their opposition to the mandated closure. Calgary's True You Salon is also considering reopening to customers as its ownership fears it will not be able to survive without a financial boost.