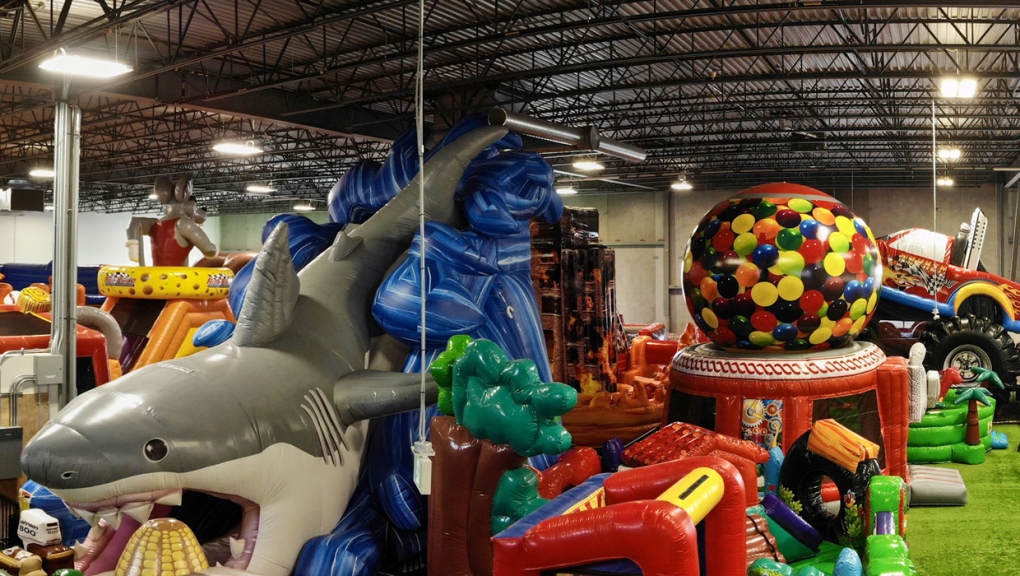 Big Fun Inflatable Park, near CrossIron Mills mall north of Calgary, first attempted to reopen back in June but was forced to close again because of health regulations. (Supplied)

CALGARY -- A day after Alberta's top doctor announced indoor play facilities could reopen to the public, the owner of one of those businesses says the news couldn't be any sweeter.

Dr. Deena Hinshaw, Alberta's chief medical officer of health, announced on social media that the restrictions placed on indoor recreation, entertainment and play centres as a result of the COVID-19 pandemic were lifted.

She said the rule change was intended to bring Alberta in line with other provinces and would only apply to those businesses that could abide by the government's rules.

Some of the province's guidelines include physical distancing inside the facilities, the option to provide private parties for cohorts and making sure that any equipment that cannot be properly cleaned remains closed to the public.

The only way there could possibly be a problem, Fuller says, is if guests don't follow the guidelines.

"I have over 30 hand sanitizers set up through the facility and have an electro-static sanitizer gun for all the equipment," he said. "All of our attractions have an entrance, a throughway and an exit.

"We're not worried about it at all."

While he's happy about the rule change now, it was a much different story three months ago, when Big Fun first attempted to reopen, along with other recreation facilities.

He explained that Big Fun was one of the first such playground facilities to close when the pandemic was taking hold in Alberta and, when the situation became dire, he retrofitted the building and put a portion of his staff back to work making non-medical face coverings.

However, when June's grand reopening was slammed shut, Fuller said things looked grim for his livelihood.

"We lost 100 per cent of our revenue for six-and-a-half months. What was I going to do with my family? We were going to make some very hard decisions."

He says many of his competitors also needed to make those same hard decisions and, without any more time to wait, several of those businesses were forced to close.

Northeast Calgary's InjaNation was one such facility that announced its permanent closure Aug. 20.

The company said it saw "no end in sight to this pandemic" and could not remain open any longer.

Fuller says even though InjaNation was one of his competitors, it was heartbreaking to see them leave the market.

"It's horrible, InjaNation was a great business. They provided a service that was much needed in the community. They did nothing wrong and the government didn't step up to the plate, none of this should have happened."

NOT MUCH NOTICE FROM ALBERTA HEALTH

While Fuller is glad Alberta Health has given him and businesses like his the green light, he says he was surprised at the lack of notice the province gave him.

"The only way I learned of it was one of my customer posted on Facebook yesterday afternoon," he said. "Some kind of guidance would have been really, really helpful. It's been absolutely horrific trying to live like this without guidelines.

"Instead of worrying about my house being listed, I could have been implementing reopening strategies."

Big Fun won't be immediately open to the public yet, as Fuller says some things still need to be done, particularly around adding staff.

It still won't be easy because a number of groups have already cancelled their bookings with Big Fun, which would have taken place over the next few months.

"It's looking pretty bleak the next few months," Fuller says. "I'm just happy to be able to feed my family."

Alberta Health told CTV News in an email that it recognizes the impact COVID-19 restrictions have had on businesses throughout the province and is continuing to update guidance as the situation evolves.

"We are updating our guidance based on the assessment of the risk of transmission and our ability to limit the risk of exposure, and updating Albertans as quickly as possible of any changes."