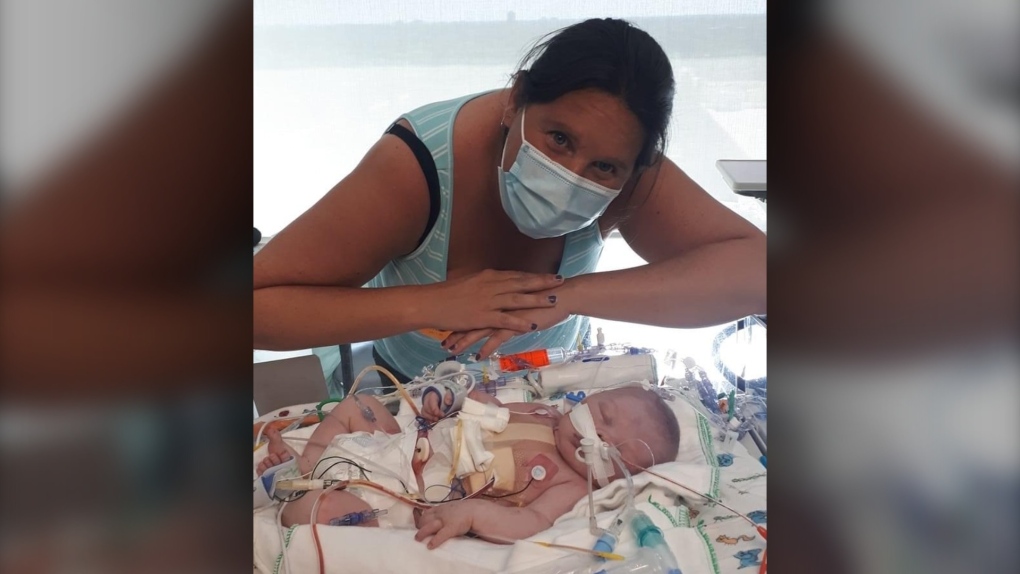 Nicole Banman and her 14-month-old son, Brodie who is need of a cleft palate surgery. (supplied)
CALGARY -

Southern Alberta families with sick children worry they may not be able to get the help they need as the Alberta Children’s Hospital plans to temporarily close down 75 per cent of its operating rooms by Monday due to rising COVID-19 cases.

According to Alberta Health Services (AHS), the hospital in Calgary has entered into a Level 4 pandemic response – the highest alert level – which results in a 60 to 75 per cent reduction in all activity, with 'life and limb' procedures the only ones conducted.

In a statement to CTV News, AHS says urgent, emergent and prioritized surgeries including cancer surgeries will still continue.

"In terms of ACH, the closure of the operating rooms enables us to redeploy physicians and staff to adult sites," said Kerry Williamson with AHS Communications.

The news is particularly concerning for Nicole Banman and her 14-month-old son, Brodie, who is in need of a cleft palate surgery to fix his speech and allow him to better communicate.

The surgery was scheduled for mid-October, but now a future operation date is unknown.

"I’m sick, I feel like puking, I feel like crying and I know I'm not the only parent who's out there that's suffering through this, but it's so hard," said Banman

"The children’s hospital should be the last place to get touched, it’s the adults who choose not get themselves vaccinated that have caused this. We’re in a pandemic and we need to do as much as we can to survive this and get back to normal and people that are not vaccinated are taking away from my baby and other babies."

Banman adds that she was told she would only be given a one-week notice prior to Brodie's scheduled surgery.

Brodie has already spent the majority of his life in hospital and suffers from a rare condition known as hypoplastic left heart syndrome. His case was so severe that doctors needed to conduct open-heart surgery just two days into his life at the Stollery Children's Hospital in Edmonton.

Dr. Roxanne Goldade, who is a former section chief at the Alberta Children’s Hospital and now practices privately as a community pediatrician, says there will be some cases where families are delayed as they await results of a potential cancer diagnosis for their child.

"A report came across my desk about a boy who potentially might have kidney cancer and his procedure to get a renal biopsy could be put on hold," she said.

"So you can’t imagine what’s going to happen to a child, what’s going on emotionally and the parents are beside themselves with worry as it just trickles down the line for what could happen next for everyone else afterward."

Goldade notes that the stress is piling on her staff members and has never seen this level of burnout in her 26 years of practice.

"The next crisis is a mental health crisis."

AHS SEEKING HELP FROM OTHER PROVINCES

As of Friday, AHS confirmed that 268 patients are in Alberta’s intensive care units the vast majority of whom have tested positive for COVID-19.

Currently, 310 ICU beds are available, which includes the addition of 137 spaces. This means current capacity is at 86 per cent, but without extra surge spaces it would 155 per cent.

The province says 91 per cent of COVID-19 patients in ICUs in Alberta are not fully vaccinated.

Speaking to reporters on Thursday, AHS president and CEO Dr. Verna Yiu implored Albertans to get vaccinated as the province has now reached out to other provinces for help.

"We are asking them if they have skilled frontline staff who may be willing to come to Alberta to assist us," Yiu said.

"Ontario has graciously offered their help and we are in discussions with them regarding potential transfer patients if needed, but we remain hopeful that we will not come to those terms."

In a statement to CTV News, the Ontario Ministry of Health was not able to confirm additional details on what kind of help it could offer at this time.

"Our officials are currently looking into what support we might be able to offer Alberta," the statement read.

CTV News also contacted the Saskatchewan Ministry of Health. It said, at this time, it does not have capacity to accept additional ICU patients from out of province.

The Ministry of Health in British Columbia also provided the following statement from Minister Adrian Dix.

"Given the current demands on B.C.'s health-care system, we will not be able to assist with taking patients at this time," the statement read. "However, we have told Alberta that if there are things we can do to support them, we will. And if we can take patients on in the future, we will."

Manitoba Premier Kelvin Goetzen announced Friday afternoon that his province would be providing pharmaceuticals to Alberta to assist during the crisis.

Alberta Health Services confirmed Friday that it will be adjusting designated support and visitation access at all acute, ambulatory and emergency urgent care sites starting Monday.

This means family members or friends will not be able to visit anyone in hospital during this time, which is a decision AHS says it did not take lightly.

"We know the importance of family presence for patients and staff, and we understand how difficult adjustments in access are for all involved," read an AHS Media tweet.

"We encourage patients, family, and friends to connect in other ways, including virtually or by phone whenever possible rather than in-person at our sites."