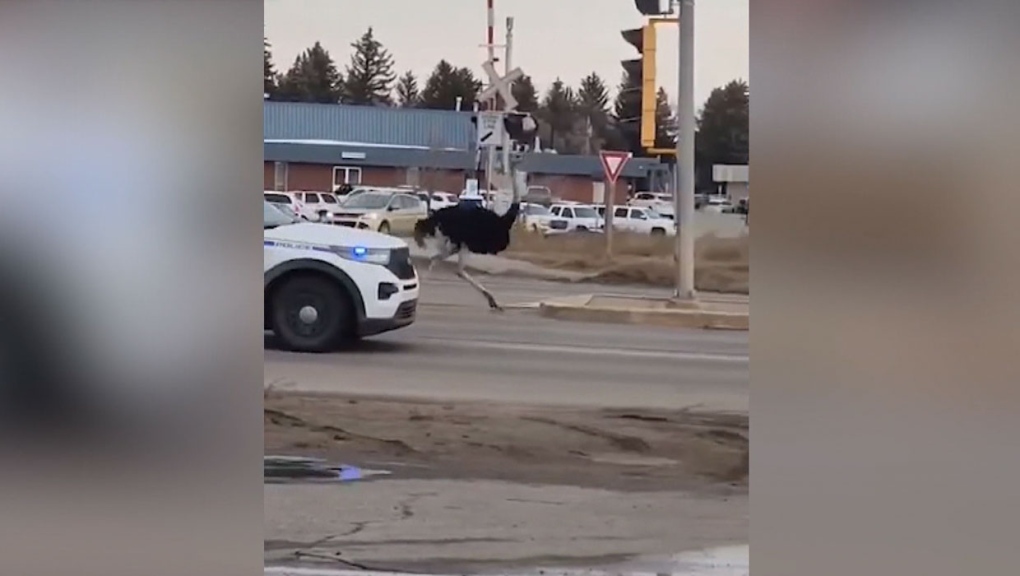 The Town of Taber has launched a #FlightlessBirdsforFoodBanks campaign to support local charities in response to a situation where a herd of ostriches were running around the community on Thursday. (Supplied/Destiny Nanaquewetung)

The ostrich round-up is still ongoing in Taber, Alta., but the community is using a bit of humour over the situation to rustle up a bit of scratch for the local food bank.

The Town of Taber is paying it forward to the Taber Food Bank with a generous donation of 20 turkeys that will form part of the holiday hampers for those in need this season.

Officials say the campaign, which it named #FlightlessBirdsforFoodBanks, hopes to share feeling of generosity it enjoyed during the community-wide effort to recapture a herd of ostriches.

On Thursday, a group of the large flightless birds broke out of an enclosure at a nearby farm and made their way into the community.

A video of a desperate attempt by a police officer, with the ostrich owner riding shotgun, has already gone viral.

"As demonstrated by the massive rescue efforts yesterday, our Taber community is generous (and sometimes funny), and we want everyone to know it," the town said on Facebook.

"If you saw the story and it made you laugh, we challenge you to donate to your local food bank so everyone has reasons to smile."

Meanwhile, the police constable who came up with the idea of using his vehicle to chase down the bird was also recognized.

"(For) his valiant efforts that are definitely NOT taught in regular police academy curriculums, Constable Weersink with the Taber Police Service is also receiving our thanks and a turkey," the post said.

"We hope he enjoys this type of flightless bird a whole lot more than the ones from yesterday."

The town says it is taking the suggestions of "annual ostrich races" and naming the ostrich as Taber's official bird under consideration.