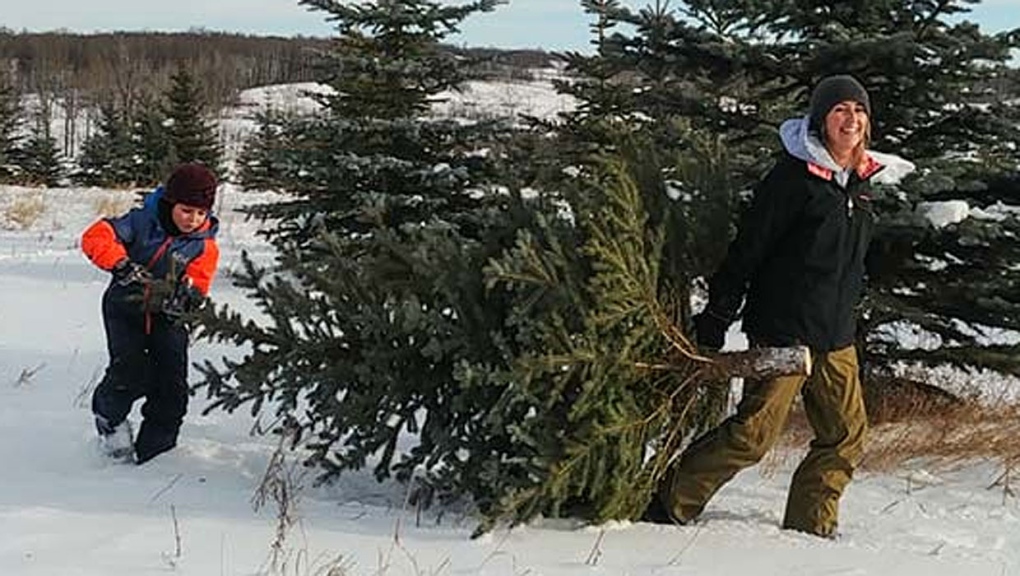 The Nature Conservancy of Canada has been harvesting blue spruce trees from a property near Red Deer for a number of years. (NCC)

CALGARY -- Because of issues 10 years ago, there aren't as many live Christmas trees available for sale this year, but an Alberta conservation group came up with a solution.

While it might seem disingenuous to some to cut down trees to help the environment, the Nature Conservancy of Canada has been doing just that for the past few years.

The difference is the trees they've targeted aren't supposed to be there in the first place, so it's actually a win-win for everyone involved.

The NCC says all the trees come from the Haynes property near Pine Lake, land they acquired back in 2011. Along with the natural area, they also inherited a tree farm filled with white and blue spruce trees.

While white spruce is native to Canada, blue spruce is not, so the NCC targeted them for removal.

Over the past week, volunteers collected about 20 trees and brought them to the Baymont Inn and Suites in Red Deer for a special Christmas show and market.

Along with a hosting number of free activities including kids crafts and gift card draws, they provided the harvested trees to people for an average donation of $100.

Now it in its fourth year, organizers say the tree removal event is a great way to raise awareness about what they do.

"More importantly, it's a wonderful opportunity to meet neighbours and other community members," said NCC manager Keltie Manolakas in a release. "We hope people will come out to the craft market to support local vendors, participate in the festivities and leave with their very own Nature Conservancy of Canada Christmas tree."

The NCC says it is planning to remove the blue spruce trees gradually over the next decade to give native species room to grow and transform the tree farm into a natural forest area.

Manolakas says there's nothing dangerous about the trees, which are originally from Colorado.

"They're not invasive, they're not harmful to the environment – they're just not supposed to be there."

Once they're all gone, it plans to add native shrubs, aspen and poplar trees to diversify the property.

Earlier this week, the Canadian Christmas Tree Growers Association said fewer farmers planted trees in 2008 because of a downturn and there's also fewer trees in B.C. because of a shortage across the border.

Many lot owners in the Calgary region told CTV News their purchase orders have dropped by about 20 per cent this year. They add that could end up in higher prices for consumers.