BANFF, ALTA. -- Travel Alberta is launching an advertising campaign with the slogan “Worth the Wait.”

With COVID-19 shuttering businesses, economies and the mountain parks, those things are gradually re-opening, welcoming back visitors.

“Maybe its a one to five-hour drive in the province, or maybe a day trip or even an overnight trip, but within Alberta.”

Tourism in Alberta generally rakes in about $9 billion in revenue every year.

This year officials say that will be cut by about 69 per cent.

The latest campaign will target Albertans to spend their money locally instead of internationally.

“This is for Albertans and Albertans only,” said Gaffney.

Gaffney adds that Travel Alberta is not in the process of welcoming back the rest of the country just yet, but restrictions will be eased as the weeks go by.

Banff mayor Karen Sorensen says some businesses are open and her community wants to see visitors.

“Albertans have always been a really important group, market and community that we invite into their backyard,” said Sorensen.

She expects business to be good, but not great.

“I think our businesses who have been able to make their way through these last several weeks, will be able to get through,” she said. 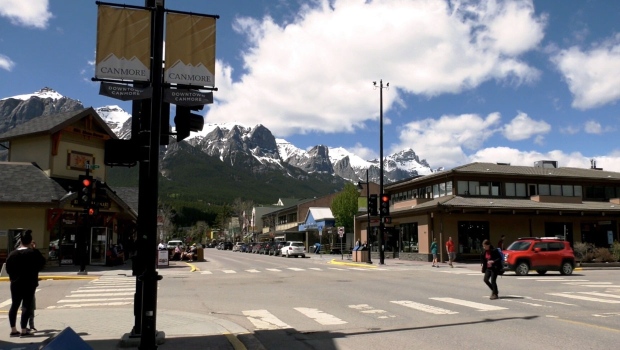 The town of Canmore has also seen a spike in day trips from Calgary, with many taking in local area hikes, and businesses re-opening in the downtown.

“I’m not expecting this to be a banner summer for the business community,” said mayor John Borrowman.

Borrowman believes that travellers will start heading to the mountain parks when they open, and alleviate some of the traffic his community has seen in the past several weeks.

Minister of Environment Jonathan Wilkinson announced that 29 of 48 national parks will reopen, including Banff, Waterton and Jasper National Parks on June 1st.

This includes trails and lake access, but campgrounds will remain closed until at least June 21st.

Minister of Environment Jonathan Wilkinson announced that 29 of 48 national parks will reopen.

For Tourism Calgary, it is also gearing up to welcome travellers to the city from other parts of the province.

“We’re about a week behind the rest of the province so we’re calling all of our partners, hotels, restaurants everyone to find out what status is,” said Cindy Ady, CEO of Tourism Calgary.