On October 1, the Alberta Review Board ruled that Matthew de Grood, the young man who stabbed five people to death in 2014, is early in his treatment but still poses risk to public safety. (File)

CALGARY – Alberta's justice minister has announced the government will be looking to Ottawa for a review after the Alberta Review Board granted more freedom to the man who stabbed five people to death in Calgary over five years ago.

Doug Schweitzer wrote on social media on Thursday his government would fight to ensure victims of violent crimes play the "maximum possible role" in the hearing process and push for Ottawa to review the standards of release.

He also said he would be working with his department to examine every other option available in the review process in Alberta in order to help victims. 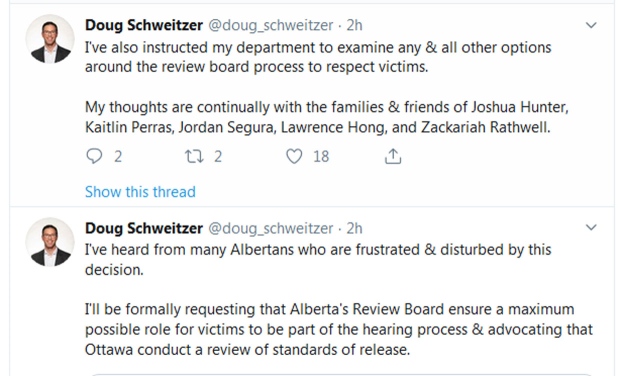 This week, the Alberta Review Board ruled Matthew de Grood, 28, should be allowed unsupervised visits in the Edmonton area and would be allowed to go on supervised camping trips and other outings based on the recommendations of his treatment team.

The young man was found not criminally responsible for stabbing Zackariah Rathwell, Jordan Segura, Kaitlin Perras, Josh Hunter and Lawrence Hong at a house party in the community of Brentwood in 2014.

A trial heard de Grood believed that the devil was talking to him and that a war was about to begin, signalling the end of the world when he arrived at the party, which was being held to mark the end of the school year at University of Calgary.

The report, released during Tuesday's hearing stated he was in the "early stages of treatment" but was also a "significant risk to the safety of the public," especially if he suffers a relapse.

Gregg Perras, the father of Kaitlin, released a statement on behalf of the victims after the hearing, calling the decision "mindboggling."

"We must help create awareness amongst the public for the problems with the NCR reintegration process and continue to push for a law amendment where NCR murderers at a minimum never receive an absolute discharge where no responsible medical practitioners monitor their medicine intake."

"We don’t see the logic in these statements of substantial threat with unsupervised access working together as public safety is paramount under the law."