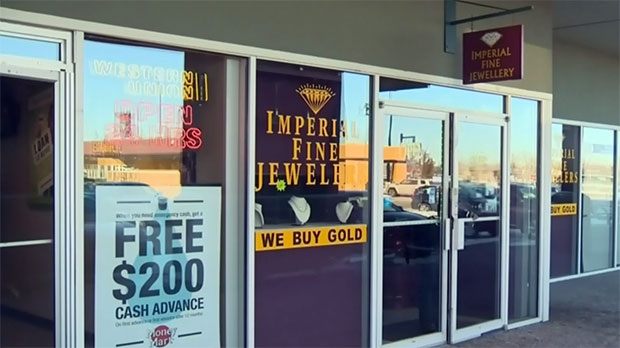 An estimated $200,000 worth of property was stolen from a northeast Jewelry store in November of 2014.

A Calgary judge has added an additional 4.5 years onto the sentence of an Alberta man for his role in a robbery at a Calgary jewelry store over three years ago.

Investigators say a man and a woman entered the business and that a weapon was discharged into one of the store’s display cases.

The trial for Darren James Bauer, 36, was scheduled to begin next month but on Friday, he pleaded guilty to a charge of committing robbery with a firearm in connection to the incident.

"The accused ordered employees of the store to lie on the floor. He then began to smash the glass display cabinets with the butt of the shotgun, which caused a round of ammunition to discharge into the ceiling of the store," Wuttunee said. "The accused then demanded information from the employees for the location of the money box or drawer. The accused pointed the shotgun at the employees before making this demand."

Bauer and Cooper put gold, diamonds and jewelry into a couple of duffle bags and then fled the scene in a pickup truck.

The property was not recovered and was estimated to be worth about $200,000.

The Crown says a plea deal for Bauer was worked out because there were some problems with the case.

Cooper, who gave an early confession, was sentenced to 4 years in prison.

Bauer was already serving an 11 year sentence for firearms offences and a joint submission of 4.5 years will be added on to that.