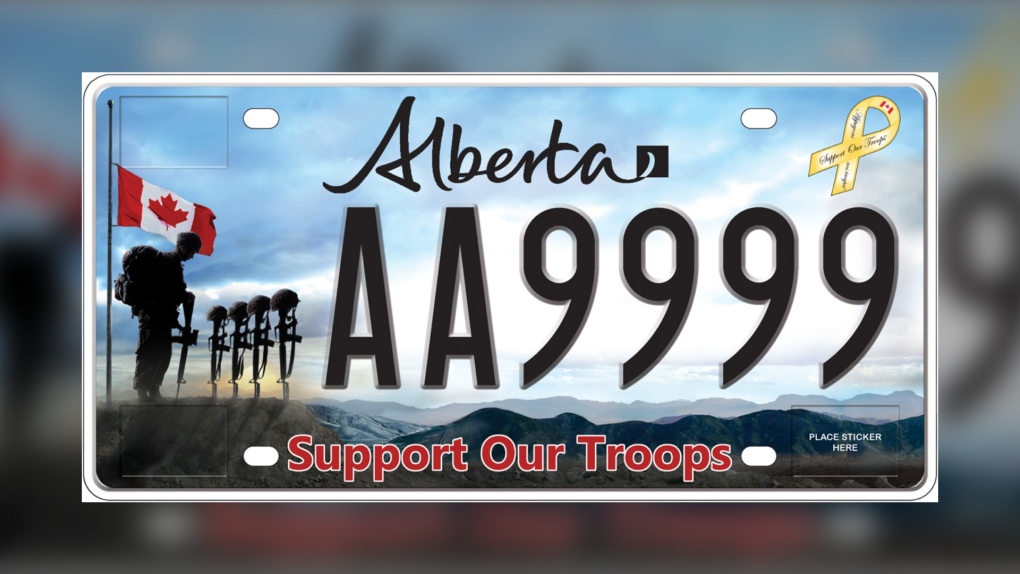 Alberta introduced the Support Our Troops licence plate in 2014 and nearly 45,000 of the plates have been sold (Government of Alberta)

CALGARY -- A significant number of Albertans continue to exhibit support for Canada's troops on their vehicles, and the sale of the Support Our Troops licence plates has raised almost $2.5 million for military families.

According to the provincial government, nearly 45,000 Support Our Troops plates have been purchased in Alberta since the program was launched in 2014.

Using the work of artist Silvia Pecota, the plates depict a Canadian Armed Forces member standing next to four helmets resting atop of rifles — recognizing the first four Alberta-based soldiers killed in Afghanistan in 2002 — near a Canadian flag waving at half-mast.

The plates are available for sale at Alberta registry offices for $75 plus fees, and $55 from each purchase is donated to the Canadian Armed Forces' Support Our Troops program operated by Canadian Forces Morale and Welfare Services. The remaining $20 covers the cost of producing and shipping the plates.

"We truly appreciate the Province of Alberta’s endorsement and support of this program, which serves as an excellent role model for other provinces who are putting in place similar programs," said Sean N. Cantelon, CEO of Canadian Forces Morale and Welfare Services in a statement released Thursday.

The Support Our Troops program provides financial support to current and former Canadian Armed Forces members and their families through the funding of organizations that support scholarships, programs for children, family assistance and homeless or at-risk veterans.