CALGARY -- A Banff area politician is getting attention for all the wrong reasons after the delivery of a controversial newsletter announced the worst of the COVID-19 pandemic was "behind us."

Miranda Rosin, UCP MLA for Banff-Kananaskis, mailed out a document to residents in her constituency this week entitled "Economic Recovery."

The flyer wasn't well received by many who read it because of the very first line.

"With the worst of the COVID-19 health pandemic behind us, it is critical that we take a confident and optimistic step forward into our future as a province."

Rosin goes on to explain that the province needs leadership to execute "a bold and aggressive strategy" to put the province's economy back on track and create needed jobs.

Following a number of details about the UCP government's Economic Recovery Plan and response to the COVID-19 pandemic, Rosin made another statement that may have startled some people.

"While the past few months have been difficult for all, I have worked with the government to approach the COVID-19 crisis in the most strategic and supportive manner possible. The results show that our province has been one of the most successful in limiting the spread, protecting our people and ensuring they could safely return to work as quickly as possible!" 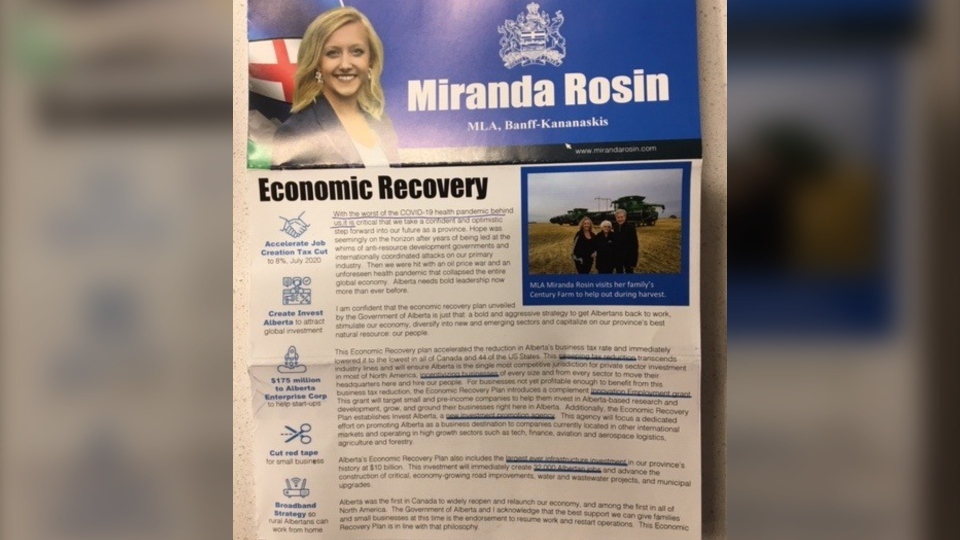 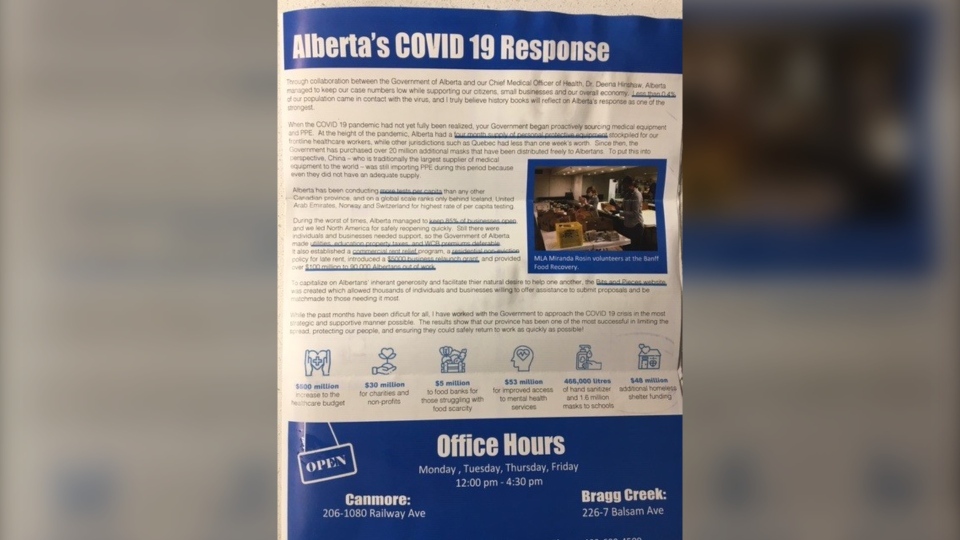 CTV News tried multiple times to reach Rosin over both email and phone on Friday and Saturday.

None of those inquiries were answered, but the MLA took to her Facebook page Saturday to shine some light on the situation.

“Printing and mailing timelines are often rather slow,” Rosin’s post said. “This newsletter was sent to print in early fall when our active cases were below 2,000, but was only delivered to mailboxes this week.”

But according to Canmore mayor John Borrowman, that’s not what Rosin said Friday afternoon.

“I did speak with the MLA to see if perhaps there had been some error in the release of the newsletter,” Borrowman told CTV News. “I know how sometimes these things happen, there may be copy that is written that’s not necessarily intended for release.”

“But she assured me that that wasn’t the case and that it was an intentional release of the newsletter,” Borrowman continued. “She was supporting her assertion when we talked about it (Friday).”

When asked about the newsletter comments, Borrowman expressed his displeasure.

“Saying that the 'worst is behind us' is not going to make my job any easier in the town of Canmore. I’m certain the mayor of Banff will be equally frustrated.”

News of Rosin's mailout comes after Alberta had recorded two days of daily increases of more than 1,000 cases.

The province's top doctor, Dr. Deena Hinshaw, said during an update on Friday that the situation facing Alberta was "grim."

"I continue to be concerned about the rise in these tragic outcomes of COVID-19," she said. "Severe outcomes are not limited just to those already at the very end of their lives and it is a mistake to think so."

But one political scientist says Hinshaw’s words carry less weight without the presence of an elected official.

“You’ve got Dr. Hinshaw going through all these very grim statistics, with no actions or policies to combat it,” Duane Bratt with Mount Royal University said. “You have the complete absence of the premier or the health minister, and then simultaneously you get this mailout from one of your backbench MLAs saying, 'No problem, the worst is gone by. Everything is good and rosy.'"

Bratt believes the provincial government hasn’t taken enough accountability when it comes to the pandemic.

”Do they believe that this is a significant crisis? Is 60 dead Albertans in a week just the cost of doing business?”