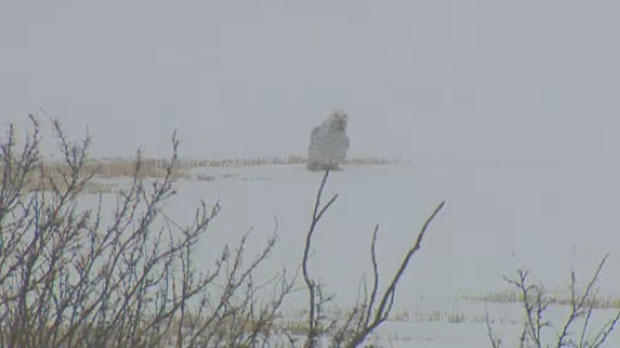 A juvenile male snowy owl was released back into the wild on Thursday. The bird was nursed back to health at Madden's Alberta Institute for Wildlife Conservation.

When a southern Alberta-based charity that helps care for injured animals were brought an injured snowy owl over a month ago, they were concerned that the bird wouldn’t be able to heal in time for its annual migration.

Holly Duvall, executive director for the Alberta Institute for Wildlife Conservation, says that the group has been caring for a snowy owl that had been found by a resident in February.

“What is unusual about him is that we actually know the true history of why he came into care. A lot of times we can only assume the history of our patients but with this particular owl, the member of the public who found him actually saw him fly into a power pole.”

The crash left the juvenile male with swelling in his left elbow along with some head and eye trauma.

Duvall says that with the centre’s help, the owl made a full recovery, and was released on Thursday, just in time to make his native migration journey.

“As we saw today, he is a really strong flyer and we are very happy that he could be released back into the wild in time for migration because this species will be heading back north to the Arctic relatively quick here.”

While at the centre, Duvall says the owl was well fed with a variety of dead prey like rats, mice and quail, given medication to help with the healing process and, above all, offered a safe, dry place to get the rest he needed to recover.

“He had to be in an environment where he could rest quite a bit, especially with that swelling. He was given anti-inflammatories to reduce that swelling as well as take away any pain in relation to the swelling. Antibiotics for the eye trauma to prevent any long-term damage to his eyes.”

She says that both staff and volunteers are trained and equipped to deal with injured animals in a way that ensures the safety of workers and the animals. If any more intensive treatments are required, like x-rays, then the animal is sedated for the procedure.

Duvall says the centre cares for about 1,400 animals each year and the costs of care can range quite a bit.

The Alberta Institute for Wildlife Conservation is a charity based in Madden, AB. For more information about the group’s work and information on how to donate, visit the official website.