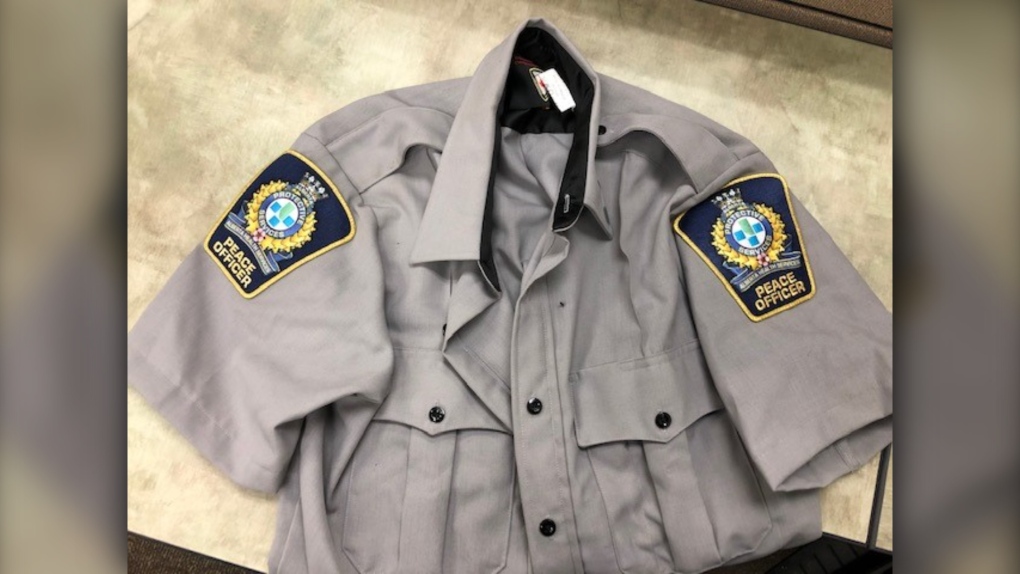 A peace officer's uniform was among the items seized in the search of a northwest Calgary home after the suspect vehicle in a Nov. 24 theft from a jewelry store was tracked from Red Deer to Calgary. (RCMP

Two Calgary men face numerous charges after the suspect vehicle in a theft from a Red Deer jewelry store was tracked along the QEII Highway to a home in northwest Calgary.

RCMP officials say the two men allegedly stole items in 'grab and go' thefts at two stores in Calgary, two in Red Deer and a store in Airdrie between Oct. 4 and Nov. 24.

On the afternoon of Nov. 24, members of the RCMP's southern Alberta crime reduction unit spotted a silver/grey sedan travelling southbound on the highway that matched the description of the suspect vehicle in the theft of merchandise from a Red Deer store.

RCMP members, with aerial support from the Calgary Police Service's HAWCS unit, followed the vehicle to a community in northwest Calgary.

Two men — 53 year-old Michael McKie and 49-year-old Carl Quesnell — were arrested at the home and a search warrant resulted in the seizure of a ring worth $2,500 that had been stolen from the Red Deer store.

The search also resulted in the seizure of:

McKie, who was wanted on three outstanding warrants out of Calgary, faces new charges including:

Quesnell has been charged with theft over $5,000 and unlawful possession of a controlled substance.

Both suspects remain in custody ahead of their scheduled Dec. 14 appearance in Red Deer provincial court.

The rightful owner of the drills and battery booster pack is asked to contact Const. Kim or Sgt. Maclaren at 403-420-4883.