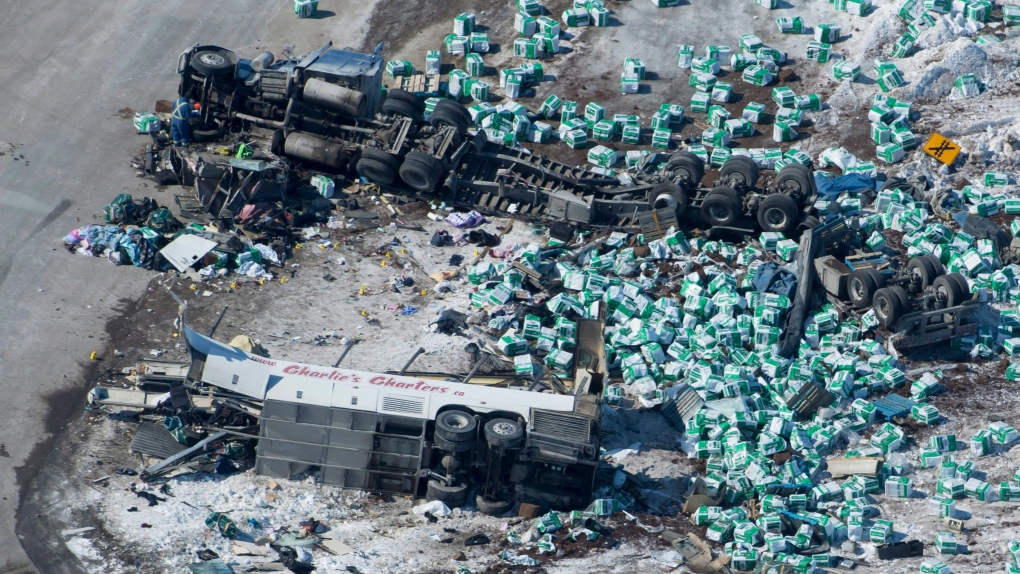 The wreckage of a fatal crash outside of Tisdale, Sask., is seen Saturday, April, 7, 2018. A bus carrying the Humboldt Broncos hockey team crashed into a truck en route to Nipawin for a game Friday night killing 14 and sending over a dozen more to the hospital. THE CANADIAN PRESS/Jonathan Hayward

CALGARY -- It's been almost two years since the deadly Humboldt Broncos bus crash in Saskatchewan and with the solemn anniversary comes a closing legal window that has seen several lawsuits filed in court.

Sixteen people died and 13 others were injured after a transport truck barrelled through a stop sign and into the path of the bus carrying the junior hockey team on April 6, 2018.

The inexperienced driver of the truck, Jaskirat Singh Sidhu of Calgary, was sentenced to eight years in prison.

A proposed class-action lawsuit was filed Friday in Regina Court of Queen's Bench against Sidhu and his former employer. It also lists the governments of Saskatchewan and Alberta, as well as the federal government.

“The people wanting to go forward aren't motivated financially so much as these were wrongs by governments,” said lawyer Tony Merchant. He pointed to the trucking industry as a major concern.

Carol and Lyle Brons are listed as the plaintiffs. Their 24-year-old daughter, Dayna, was the team's athletic therapist and was killed in the crash.

Also listed are all the others who were on the bus, their families, all hockey team staff, billet families and first responders who treated the victims.

At least one family has said it has asked to be removed from the class action, which still needs to be certified by the courts.

Several other lawsuits have also been filed.

Russ and Raelene Herold of Montmartre, Sask., were among the first of the families to file a few months after the collision. They are suing the truck driver, the Calgary-based company that employed him and the bus manufacturer. The lawsuit asks for damages and a court order that all buses carrying sports teams in Saskatchewan be equipped with seatbelts.

The couple's son, 16-year-old Adam, was the youngest player on the team to be killed.

Their suit has since been joined by the families of three players and an assistant couch who died: Jaxon Joseph, 20, of St. Albert, Alta.; Logan Hunter, 18, also of St. Albert; Jacob Leicht, 19, of Humboldt; and Mark Cross, 27, from Strasbourg, Sask.

No statement of defence has been filed in that lawsuit.

Injured Broncos player Derek Patter, 21, of Edmonton, filed in March against the truck driver and the trucking company. The Alberta government joined as a plaintiff to recoup health-care costs.

Kevin Matechuk of Colonsay, Sask., said his family would also be filing a lawsuit against the trucker and trucking company on behalf of his son Layne, 20, who is still recovering from a traumatic brain injury.

“He will need special care. We don't know if he will ever be able to live on his own. We're hoping so. It's still our hope and dream.”

It's the same situation for Ryan Straschnitzki, 20, of Airdrie, Alta., who was paralyzed from the chest down. His suit also takes on the Alberta and Saskatchewan governments, as well as the team's bus driver.

“There's always new expenses and he's going to have to be taken care of for the rest of his life,” said his mother, Michelle Straschnitzki.

“We won't always be here. And people don't understand ... long-term care for people who are in wheelchairs - the cost is astronomical.”

The Straschnitzkis said they've received hateful comments and death threats since their lawsuit was reported in the news last week.

“Ryan never got millions from the GoFundMe like a bunch of these dummies are saying,” said his father Tom Straschnitzki.

Some families have said they plan to give away through charities some of the money they received from donations.

“It's not our plan to sue,” said Toby Boulet, whose 21-year-old son, Logan, was killed.

The Lethbridge family has used money received to set up a fund for causes that were important to their son, including organ donation.

The Adam Herold Legacy Foundation is a charity that gives Saskatchewan youth a chance to develop their hockey skills and leadership potential.

Others, including Evan Thomas's family of Saskatoon, have given back through memorial scholarships and other donations.

“We just don't feel its part of something we want to be a part of,” he said.

Thomas said it might have been different if his son had lived. “I know a lot of people think insurance is going to take care of them, but it's not.”

At least one injured player doesn't want anything to do with a lawsuit.

Myles Shumlanski of Tisdale, Sask., said his 22-year-old son Nick just “wants to move on.” He was the only one on the bus able who walked away without serious injuries.

“We're going to put in for a little bit of insurance,” said his father.

“He doesn't even feel comfortable doing that.”

- With files from Colette Derworiz in Edmonton

(This report by The Canadian Press was first published April 3, 2020)