AMA survey says Albertans lack confidence in winter driving abilities of other motorists, but not their own 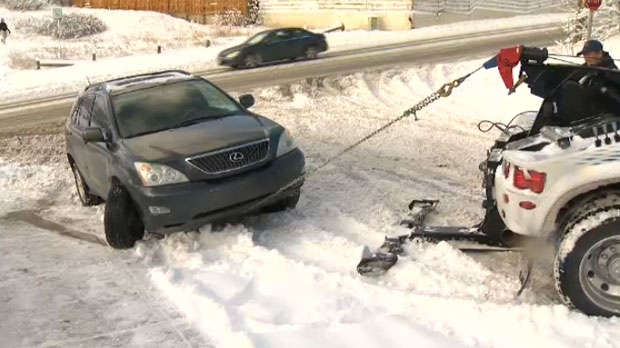 A new survey by AMA found Albertans have confidence in their own winter driving abilities, but not others.

CALGARY -- When it comes to winter driving, anyone going faster than you is a maniac and anyone going slower is an idiot.

Those words by George Carlin ring true for a majority of Albertans, according to a recent survey by Alberta Motor Association.

It found just 19 per cent of drivers feel confident in the winter driving abilities of those sharing the road while 92 per cent have confidence in their own skills behind the wheel while traversing ice and snow.

And men tend to think of themselves as better winter drivers, giving an average of 6.3 on a seven-point scale, compared to 5.6-out-of-7 by women.

But men and women were closer to agreement when it comes to thoughts about other drivers, giving a confidence rating of 3.6 and 3.3 out of seven respectively.

“When it comes to bad winter driving, the mentality is, ‘It’s not me, it’s you,’” Ryan Lemont, manager of AMA driver education, said in a release.

“We tend to overlook our own driving errors but are quick to notice the mistakes of others — and that’s not a great foundation for improving safety.”

Using winter tires is one of the best ways of increasing road worthiness, says AMA, as they provide better traction on snow and ice, and have reduce stopping distance.

About two-thirds of Alberta — 67 per cent — use winter tires, according to the survey.

For drivers who don't switch over, 76 per cent say their current tires work just fine, while 53 per cent feel having all-wheel drive compensates for a lack of winter tires.

Twenty-five per cent of those who don't use winter tires say expense keeps them from switching over, while 24 per cent say the inconvenience of having it done is what stops them.

And being a conscientious driver is another way to improve safety on the roads.

“A handful of simple safety steps can greatly reduce your chance of an incident,” says Lemont. “Increase your following distance, allow extra time so you aren’t rushed, drive to conditions, and ensure your tires are properly inflated.”