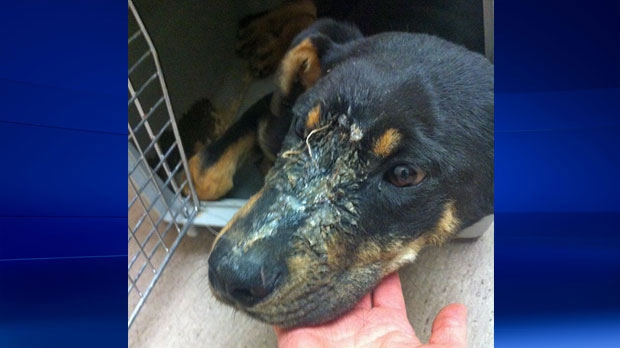 Lenny and some of the other animals can be visited at the Safe Haven location, Bay G 3851-21 Street NE, Calgary, AB

A local animal rescue organization has been inundated with animals over the last few months and is in desperate need of cash and supplies.

Three seriously injured animals were rescued by the Alberta Animal Rescue Crew Society on the weekend and the medical bills have put a strain on the groups operating funds.

The two dogs and a cat were brought in on Saturday and one of the dogs was found emaciated, oozing infection from his face and unable to bear weight on his back leg.

The dog, named Lenny, had a shattered femur which required amputation and X-rays revealed bullets lodged throughout his body.

“How he survived is beyond belief,” says Deanna Thompson, Executive Director of AARCS, “These animals show true triumph over adversity."

AARCS currently has over 50 animals in its care and has rescued over 130 animals in the past month.

“Right now we are focusing on getting the animals the care they need and trying to find ways to raise funds to cover their costs,” says Deanna Thompson, Executive Director. “As a no-kill rescue organization we feel these animals deserve the same treatment as any family pet. They may be homeless now, but their injuries and illnesses are treatable and they need help. AARCS is here to provide that to them.”

The animal charity has over 400 homeless animals in foster care at its facility in the city’s northeast and relies on donations to cover veterinary costs.

The following items can also be dropped off at the AARCS Safe Haven location (Bay G 3851 21 St. NE)