CALGARY -- Another player who did great things with the University of Calgary Dinos has signed a deal to do even more with the Calgary Stampeders.

Connor McGough was born in Medicine Hat. He played his university football here in Calgary with the Dinos.

When McGough had a chance to sign a two-year contract with the Stamps, he says he jumped at it.

“Very excited because it means my family can come to games more often and my friends,” he said. "I know they’re just as excited as me or more excited so it’s a very special moment for all of us.” 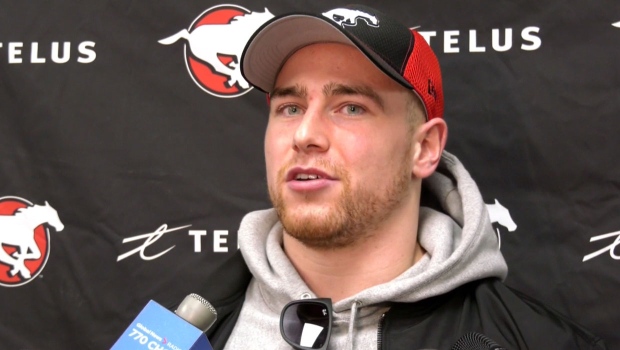 McGough was selected fourth overall by the Hamilton Tiger-Cats in the 2017 CFL draft. President and general manager John Hufnagel says the Stamps have always had an eye on McGough and says this is a good fit for both parties.

“We admired him when he played at the U of C. You know he was a high draft pick,” Hufnagel told a media gathering. "He brings a lot to the table and he’ll contribute on defence and on special teams.”

McGough will see a lot of familiar faces at training camp. He’s not the only former Dino who is on the Stamps roster. Over the weekend, Hufnagel inked another Dino alumnus, Sean McEwen.

They’ll also be joined by Michael Klukas, Ryan Sceviour, Richard Sindani and Nick Statz. McGough says it will be like a reunion.

“Football is a brotherhood and you create a lot of great relationships. You know to be back on the field playing for a common goal again is pretty special.”

With all that done, Hufnagel doesn’t think he’ll be doing much more.

“You know, I’m still having some chats with linebacker Corey Greenwood, but I don’t see us doing anything else. Unless you can lend me some money,” he says with a laugh.

The Stamps did lose a couple of players on day one of free agency; receiver Juwan Brescacin is headed back home to play for the Toronto Argonauts and running back Don Jackson signed with the Hamilton Tiger-Cats.