They have been a staple in the downtown core for several months, where thousands have gathered to protest the measures.

Rally organizer Ryan Audette says with Alberta moving back into Step 1 of its relaunch plan, it is crippling small business.

“Most of them they were on board with this in the beginning, a year ago, everyone was willing to do their part,” he said.

“They can’t take any more of this, they are fighting for survival.”

Audette, who has hosted the rallies at the park, has led marches to city hall as protesters gather with friends and family saying the restrictions impinge on their Charter rights.

He suggests provincial officials can not be trusted as he believes they continually move the goal posts to a reopen strategy.

“They’re putting them through hell now with this flip-flopping. Every time they tell these guys to shutdown or reduce their capacity, they have to lay off staff, they have to remove inventory, they have a lot of costs involved.” 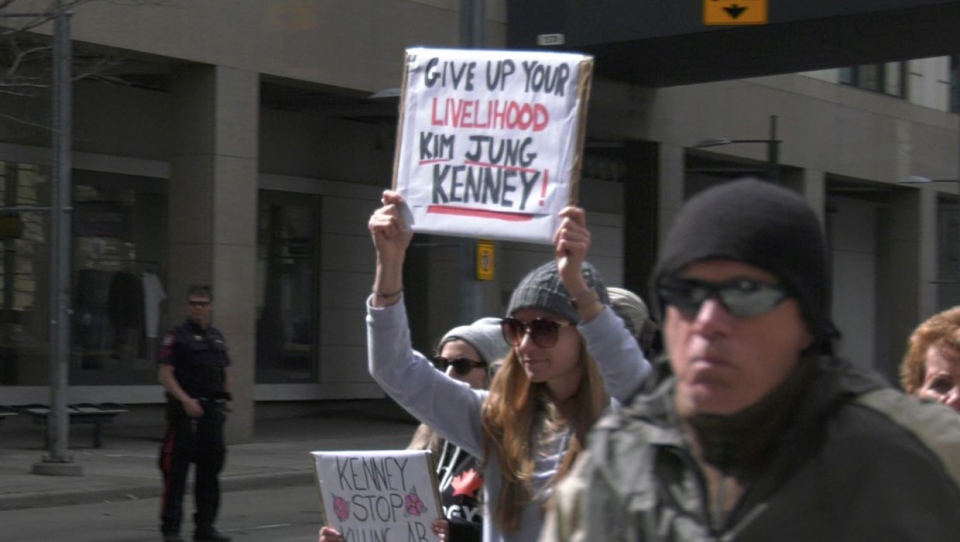 Jane Sengerlang, a Rocky View County resident who lives near Beiseker says a regional approach to restrictions is needed, as small town businesses are suffocating.

“While we totally respect that the vulnerable need to be protected, you can’t put a blanket control on everybody,” she said.

“And this is unfortunately what it appears to be, and in small communities the impact is even greater, because you have to rely on each other.”

She adds that the province has not been clear on what reopening the economy will look like.

“The conditions are met and then you move the bar. It’s not fair and its not even reasonable.”

Premier Jason Kenney was asked about gatherings on Saturday and he says anyone who gathers should be following all public health measures.

“At least two metres between family cohorts, please wear masks and please avoid physical contact to keep each other and the broader community safe,” he said.