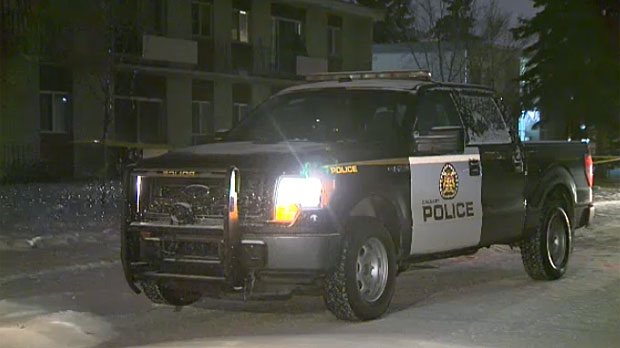 CALGARY -- An investigation by Alberta's police watchdog determined that the actions of a Calgary Police Service member were justified in the 2018 shooting death of a axe-wielding suspect with mental health issues.

According to the Alberta Serious Incident Response Team (ASIRT), there were several calls to 911 in the days prior to the fatal shooting including two calls from the 43-year-old suspect requesting an ambulance and a call from the suspect's father seeking help for his adult son.

During one of the emergency responses, police said the man appeared to be in a verbal loop where he repeated the word "Bourne" three times, followed by "911" three times, then "Crickets" three times, before repeating the phrases. The man allegedly told police during the Jan. 21 response that he was the reincarnation of actress Jennifer Aniston and that, "All I want is for someone to tell me I'm not insane."

The man was transported to the South Health Campus on the evening of Jan. 21 where he was assessed and discharged.

Officers were called to a two-storey apartment building in the 600 block of 68th Avenue S.W., in the community of Kingsland, shortly before 9 p.m. on Jan. 27 following two reports indicating a man was having a meltdown and appeared impaired.

The suspect was said to be throwing things down the hallway outside his second-storey suite and had given his pet bearded dragon to a neighbour.

Despite several requests from police, the suspect refused to leave his apartment to speak with the officers. A decision was made by the CPS members to step back, await the arrival of EMS and attempt to persuade the suspect to voluntarily leave with the paramedic crew under the Mental Health Act.

An officer in the back parking lot of the building spotted the suspect on a balcony holding what was believed to be a knife and an axe. The officer asked the suspect if he had a gun and the suspect is said to have responded with "No. I wish. I would shoot you all."

A second officer moved from the front of the building to the back and the two members attempted to calm the suspect.

The suspect jumped from the balcony to the ground below — a drop of nearly four metres — and began to approach the officers. One of the officers told the man to drop the axe and the suspect, according to ASIRT, allegedly responded "No, I'm going to cut your (effing) head off" followed by "Shoot me. Shoot me."

Following several more commands to drop the axe, an officer fired a single shot into the advancing man's torso. The suspect fell to the ground and was subsequently restrained.

Police recovered a small black-handled axe and a kitchen knife from the area below the apartment balcony and two knives were located in the clothes the man had been wearing.

The handcuffed man remained conscious throughout the response and was transported to hospital by EMS. The suspect complained that his wrists were sore and EMS replaced his handcuffs with Velcro restraints.

The 43-year-old man underwent emergency surgery but died in hospital shortly after 2 a.m. An autopsy confirmed the man died as a result of the gunshot wound to his chest and a toxicology report indicated alcohol and cannabis were in the man's system.

ASIRT confirms the suspect had been to a local pub with another resident of the building in the hours before the shooting but the pair left after one drink following a conflict with the pub's staff.  The suspect was said to have ran into traffic in what the other resident said was the man "trying to get himself killed."

Officials say the suspect had no criminal record and his declining mental health was attributed to a serious head injury he suffered as the victim of a 2015 assault.

In its findings, ASIRT called the death of the man who was "clearly in the height of a mental health crisis" a tragedy but confirmed that the officer's decision to fire a shot was both lawful and justifiable as the suspect was armed and capable of causing grievous bodily harm or death.

The officer who fired the lethal shot, a 13-year veteran of the force, will not face charges in connection with the man's death.