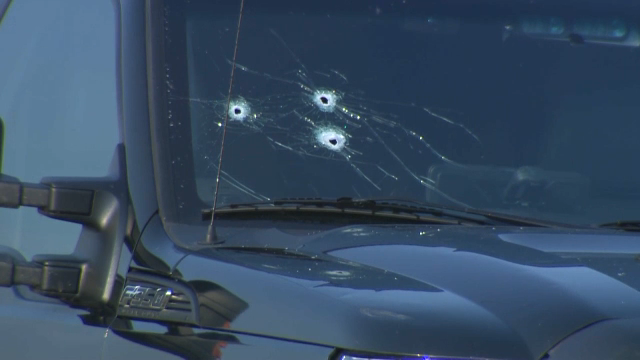 Damage to one of the vehicles involved in shooting incident on MacLeod Trail.

The Alberta Serious Incident Response Team (ASIRT) has been called in to investigate after a Calgary police officer’s firearm was discharged Friday afternoon during a stolen vehicle investigation.

It began around 4:00 p.m. Friday afternoon when police say a stolen vehicle with two occupants inside was spotted on southbound Edmonton Trail.

HAWCS and the Tactical Unit responded after the vehicle began driving away through south Calgary w2hich at times saw the vehicle head into oncoming traffic and on sidewalks.

Police say at one point the Ford F150 drove into the Chinook Centre parking lot and into oncoming traffic before getting back onto Macleod Trail.

Police say around 5:00 p.m. police decided the vehicle’s driving pattern posed a significant risk to the public and had to be stopped.

A CPS Tactical Unit vehicle intentionally made contact with the Ford F150 at southbound Macleod Trail and Heritage Drive and shortly after that a tactical unit officer’s firearm discharged.

The two occupants of the vehicle were taken into custody.

One person was transported to hospital with minor injuries that are unrelated to the officer’s discharge of his firearm.

No members of the public or police officers were injured during this incident.

The subject officer is now on a 30-day administrative leave which is policy.

ASIRT will investigate the circumstances surrounding the arrest and discharge of firearm.

The Calgary Police Service is responsible for the continuing investigation into the possible criminal conduct of the occupants of the vehicle.