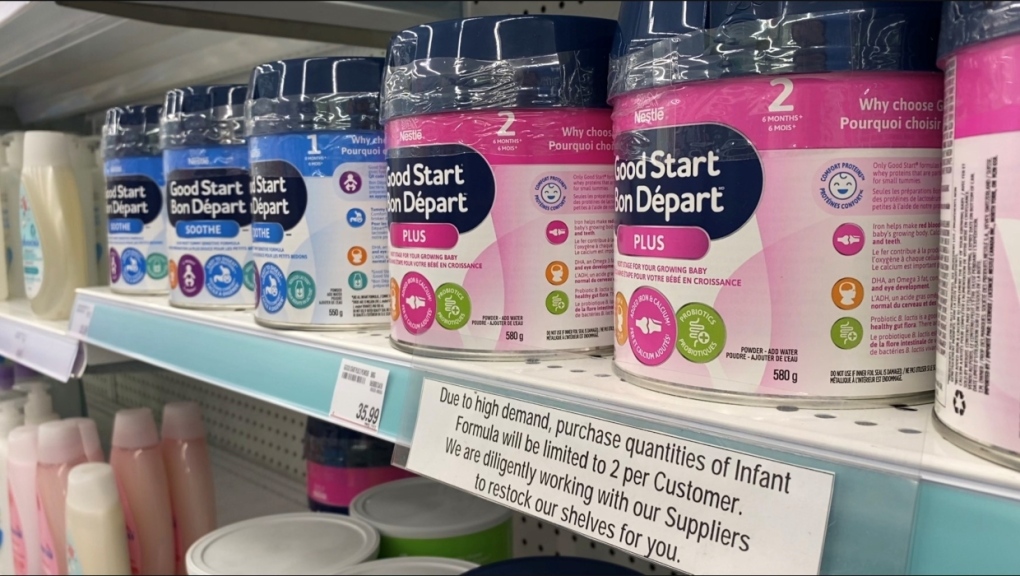 Many stores in Lethbridge are limiting the number of formula containers that can be purchased due to a formula shortage.

A baby formula shortage in the United States is starting to affect some families in Lethbridge.

"We are in a really tough situation because Luca can't have just any formula," said Charidy Spencer, whose five-month-old son has a milk protein allergy.

Spencer says she’s been to stores across the city looking for specialized formula, with many shelves out of stock. She says finding the specialized formula could be challenging even before the shortage, but now it’s nearly impossible.

"Hypoallergenic formulas, they taste terrible and they smell terrible, so when you find one that works, you don't want to have to switch," she said. "It's a terrible thing to go through."

Some brands of formula are still available, but more specialized options aren't.

In February, food safety issues forced the closure of the Michigan plant that supplies much of the special formula, which has caused a ripple effect across the board.

"It really was just a matter of time before the recall affected the Canadian market," said Sylvain Charlebois, director of agri-food analytics lab at Dalhousie University. "That's what we’re seeing right now."

According to Charlebois, there is a baby formula manufacturing plant in Kingston, Ont., but it’s foreign-owned and all of what it produces is shipped overseas.

"All of the production actually goes to China, and they're operating at a 60 per cent capacity, so one has to wonder whether that capacity is enough to support the Canadian market," he said.

Charlebois says the Abbott formula plant in Michigan could reopen in just a couple weeks, at which time it would take another four to six weeks to stabilize the supply.

Many stores are limiting the number of containers that can be purchased by a customer to counter the shortage.

With shelves becoming bare in Lethbridge, Spencer says she's trying to switch formulas, but pharmacists are cautioning against that move.

"Try not to change it, and if you want to change it, do not change it by yourself. Check with a pharmacist, we have extensive resources available to figure out what formula would fit best for their needs," said Vishal Sukhadiua, owner and pharmacist at The Medicine Shoppe.

Charlebois says the shortage is expected to continue until mid-June.

Spencer says while she has enough stock for the time being, she’ll continue to keep an eye out when visiting the grocery store as the uncertainty continues.

"We have friends and family looking all over Alberta for us. Everywhere from Medicine Hat up to Edmonton, basically, and all the way across," she said.

Health Canada says a potential shortage of sunflower oil could also have an affect on formula stock.