Bars serve up help for rival devastated by flooding

CALGARY -- Calgary brewers and bar owners, who know how precarious their industry can be, are stepping up to help one of their rivals, that was double-devastated this week by the winter thaw.

“Margins are not like in the car business when you’re running a restaurant. Margins are very small.” said Gerry Forbes, a part-owner of Bookers Crab Shack

Forbes is organizing a fundraiser for the owners of the Pig and Duke pubs.

Unbelievably, both of the pub’s locations were flooded this week by burst pipes.

Joanne Louden, who owns the bars along with her husband received a panicked phone call from cleaning staff Sunday morning, who said water was filling their 12th Ave S.W. location.

“The water was still pouring from the ceiling when I got there “ Louden said. “The fire department came and turned the water off.

"We went home after it was a all cleaned up, we’d called our insurance company and then two hours later it happened again! A pipe burst again.”

The next day, staff began moving undamaged food and other goods from the flooded bar to their sister pub on 4th street. 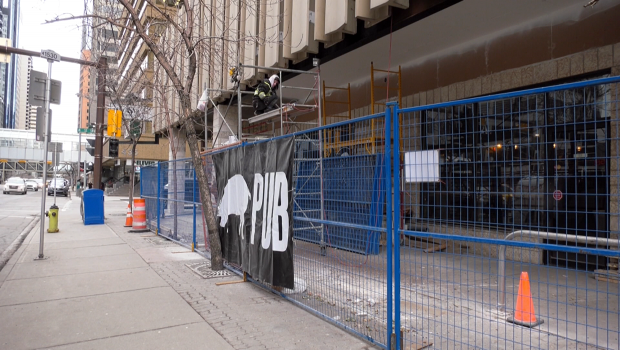 As they were doing that, a sprinkler pipe in the ceiling burst at the 4th Street location, dousing the entire space with water.

“Our ceiling fell out beneath us,” says Louden. “It was just a waterfall. It happened for 45 minutes straight (because) we couldn’t find the shut-off valve for the sprinklers.”

Louden said insurance should cover the damage and the lost business.

However, that doesn’t cover the payroll for more than 60 people who are suddenly without jobs.

That’s prompted the idea of hosting a fundraiser, the date of which is still being determined.

“I just reached out to everybody and they said we’ll be there” said Forbes of his rival bar owners. “We’ll pass the plate to get donations and see if we can make up a couple weeks pay for those out of work.”

“We have great staff at both locations,” said Louden “and that’s what hits us the hardest.

Louden said she doesn’t know when either of the pubs will reopen.

She expects a full report from her insurance company within a week.

However, she hopes at least one can open its doors by Super Bowl Sunday on Feb.2, one of their busiest days of the year.

All hope is not lost for bar owners as a fundraiser is being planned for Feb. 8 at the Township Bar & Grill.