Batherson scores twice for Senators in 5-1 win over Flames 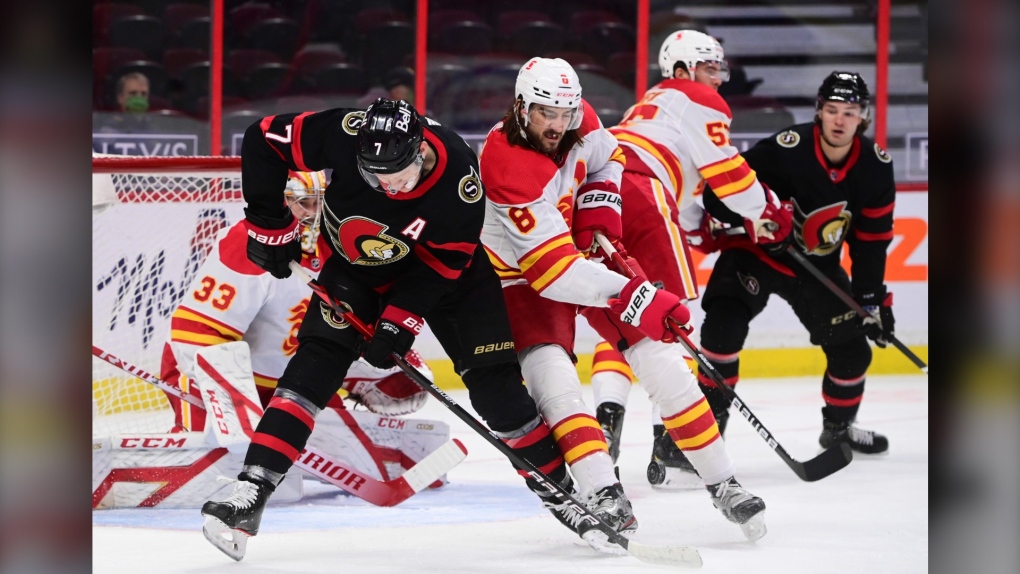 OTTAWA -- Drake Batherson scored a pair of goals for the Ottawa Senators in a 5-1 win Monday over the visiting Calgary Flames.

With seven goals in his last six games, the 22-year-old Batherson matched the franchise record held by Jason Spezza for the longest goal streak.

"I don't know. Everything I'm just shooting is going in," Batherson said. "Boys are making some great plays for me. The second one was lucky tonight."

Colin White, with an empty-net goal, Artem Anisimov and Evgenii Dadanov also scored for the Senators (8-15-1). Tim Stutzle had two assists in Ottawa's fourth win in its last five games.

Matt Murray, who was pulled in Saturday's 6-3 loss to the Flames, stopped 27-of-28 shots for the win including all 22 he faced in the first and third period.

"He was dialed in right from the get go," Senators head coach D.J. Smith sad. "He was even better there in the third.

"He gave our team a chance to get our feet going and certainly was the best player on the ice for us."

Milan Lucic scored for the Flames (10-11-2), while David Rittich made 31 saves in his fifth straight start.

After White's empty-netter, Dadanov scored with Rittich back in net at 17:47 of the third.

"We didn't sit back in the third," Batherson said. "We kept it going so it was perfect."

Ottawa capitalized on a pair of Calgary mistakes and outshot the visitors 22-6 in the second period to lead 3-1 heading into the third.

Rittich put a clearing attempt on the stick of Batherson at the face-off circle. The right-winger whipped the puck by the Calgary goaltender's pad at 11:44 for his second of the game and first career multi-goal game.

Lucic had just pulled the Flames within a goal scoring on the power play at 10:20. He collected his own rebound and his shot that went off a Senators skate slid by Murray's outstretched pad.

Anisimov scored his first of the season at 6:22 off a Flames turnover in the neutral zone where Sam Bennett overskated a Lucic pass.

Stutzle dished to Anisimov, whose shot deflected off a stick and by Rittich.

"We shot ourselves in the foot an awful lot," Flames head coach Geoff Ward said. "I thought our first period was good."

The Flames outshot the Senators 12-7 in a scoreless first period in which both teams failed to convert a power-play chance.

Calgary's pre-game warmup was adventurous. Defencemen Nikita Nesterov and Rasmus Andersson collided and went down near the blue-line.

A helmetless Sean Monahan took a puck to the face during warmup, but played in the game.

"We had an opportunity tonight to get off the road trip above .500 but we didn't get it done," Ward said.

"We've got to find the answers. Nobody is going to feel sorry for us. We've got to come up with the solutions ourselves. As a team we've got to be more committed to playing the game the right way."

The Sens start their own six-game road swing Tuesday facing the Montreal Canadiens before heading to Calgary for Thursday's rematch with the Flames.