Baton twirlers find a way to get competitive

CALGARY -- Baton twirling has got to be one of the safest sports in the world during the COVID-19 pandemic and this time of social distancing.

11-year-old Zoe Boyd from the Inspire Baton Club in Olds sure seems to think so.

“It is because people don’t really want to go near you because they don’t want to get hit by a metal stick.”

While baton twirlers can practice outside. They can’t get into the gym just yet.

Another thing they haven’t been able to do is compete. 15-year-old Malina Seredinski of the Baton and Dance company in Calgary says that’s what she misses the most.

“I just like the whole experience and environment of competition,” she said. "They’re just so much fun to be at.”

Jenna Jemieff is the technical chair of the Alberta Baton Twirling Association. One day she had an idea. If the pandemic meant they couldn't get together, why not hold a competition online?

Jemieff explains how it worked.

“We had athletes film themselves performing their routines individually and on their own,” she said.

“They had to submit their video and registration online," she said. "We have a panel of judges that are going to be evaluating their routines and providing them with a critique of the events that they did.” 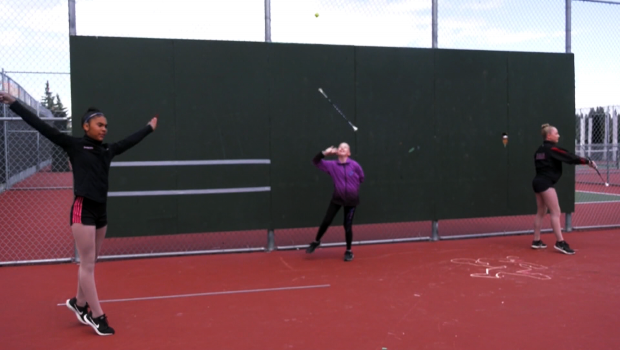 14-year-old Bella Evans of the Baton and Dance Company loves to compete. She says the online competition is just what she needed to boost her spirits.

“I was getting a little scared that I wouldn’t get to compete this year,” she told CTV.

“It was fun being able to take the videos and submit them.”

Forty twirlers from Alberta took part in the online competition. Loranne Meek is a coach and was one of the judges. She says she was impressed with some of the performances.

“Yeah I was actually. I think it’s important for them to have that space to be creative as well and not always have someone telling them what to do.”

There were no medals. No trophies were handed out. But that’s not what this was all about.

It was about being able to get creative again and to be able to get that feeling of competition back.