Snowy conditions has made for nearly impassable roads in the mountain parks and the flurries are now headed toward Calgary.

Environment Canada issued a snowfall warning near Banff, Lake Louise, and the Saskatchewan River Crossing and a winter storm warning is in effect for Yoho and Kootenay National Park where upward of 30 centimetres of snowfall is expected.

Banff RCMP issued a release for extreme road conditions on Highway 93 near the Alberta-British Columbia boundary encouraging people to stay off the roads. A jackknifed semi truck became stuck on the highway Sunday evening and resulted in a multi-vehicle collision.

The southbound lanes of the highway were closed to traffic for several hours but reopened shortly after 10 a.m. Monday 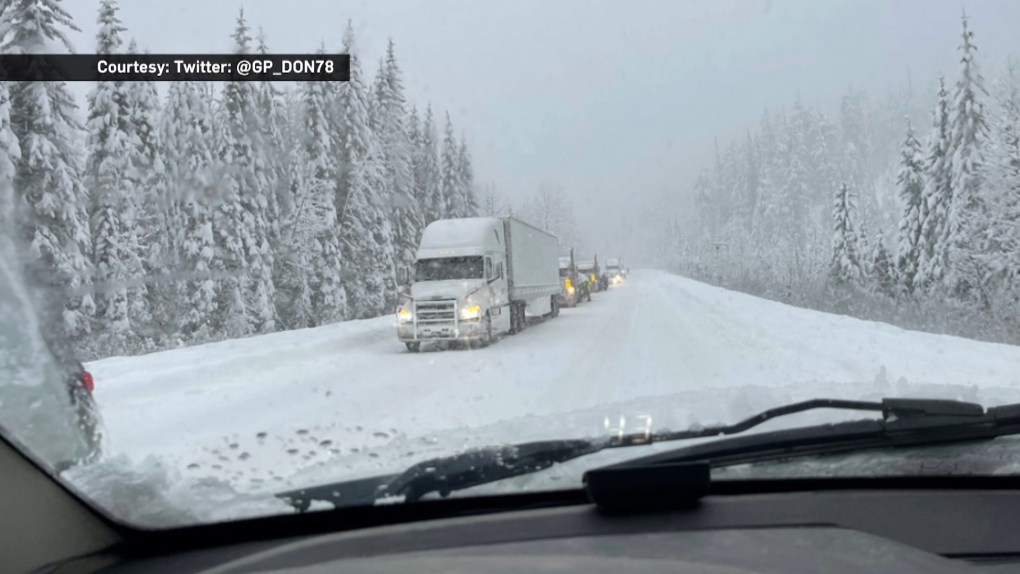 RCMP are asking motorists to avoid travel along Highway 93S between the Trans-Canada Highway and the Alta.-B.C. boundary due to extreme road conditions. (Twitter: GP_DON78)

Calgarian Jason Cameron left Inveremere about 8:15 a.m. Sunday with his daughter and her friend, and they reached Highway 1 about 10:30 a.m.

"Then we were home in Calgary just after (noon), so four hours on the road. We must have happened up on it pretty early because there wasn't a backup yet."

Cameron said ther were semi trailers "scattered on both lanes of the highway, but there was enough room for my truck to get by."

"There was probably (four metres) of path to weave through the trucks," he said. "There wasn't anybody in the ditch, just trucks couldn't get up (the hill). We were lucky."

His partner wasn't so lucky, having left Invermere about 9:30 a.m. Sunday. They were forced to turn back, then attempted the journey again on Monday morning, arriving in Calgary about 11 a.m.

Janice Lacroix was returning to Calgary after spending a long weekend at Kickinghorse with friends.

"That's where we stopped, unfortunately," she said.

"We were trying to get our son to his 3:30 p.m. hockey game and thinking we'd left in great time but by the time we hit Highway 93 we came to an absolute standstill," she said.

"Initially we sat there for about three-and-a-half hours, really hoping for any indication of what was happening. By all indication the people in front of us had no idea what was happening, the people behind us had no idea. We did see two RCMP cruisers with their flashers on driving by and all they did was look, but didn't stop to provide any information or support."

By 4 p.m., with two young kids in their vehicle, Lacroix said they made the decision to return to Invermere.

The family then tried returning to Calgary once again about 4:45 p.m. but the highway still wasn't moving.

"We sat again for another three hours," she said. "We just thought, we can't do this anymore, we still didn't have any information on what was going on."

So they headed south to Highway 3, arriving in Calgary about 2 a.m. Monday.

The snow and cold is to blame for the treacherous travel conditions.

Environment Canada said 10 to 30 cm fell Sunday in various sections of Banff National Park, with 60 cm of total snowfall expected by Tuesday along the route toward Radium, B.C.