The nerves were high for Tsuaki Marule as she sang O Canada in front of thousands of fans at the Toronto Blue Jays game on Friday.

“It was an amazing feeling,” Marule said.

“I felt a lot of pride to be able to do the performance in Blackfoot, to represent my people, the Niitsitapi people.”

Marule, who is from the Blood Tribe, performed the national anthem in English, French and Blackfoot.

It's an experience she’ll never forget.

“I wasn’t able to speak Blackfoot fluently because of the residential schools,” Marule said.

“A lot of my cousins can’t because that break in our culture took place, so for me, being able to sing the song in Blackfoot is a way of rebuilding that language and that pride in your language and culture because that’s what was taken away.” 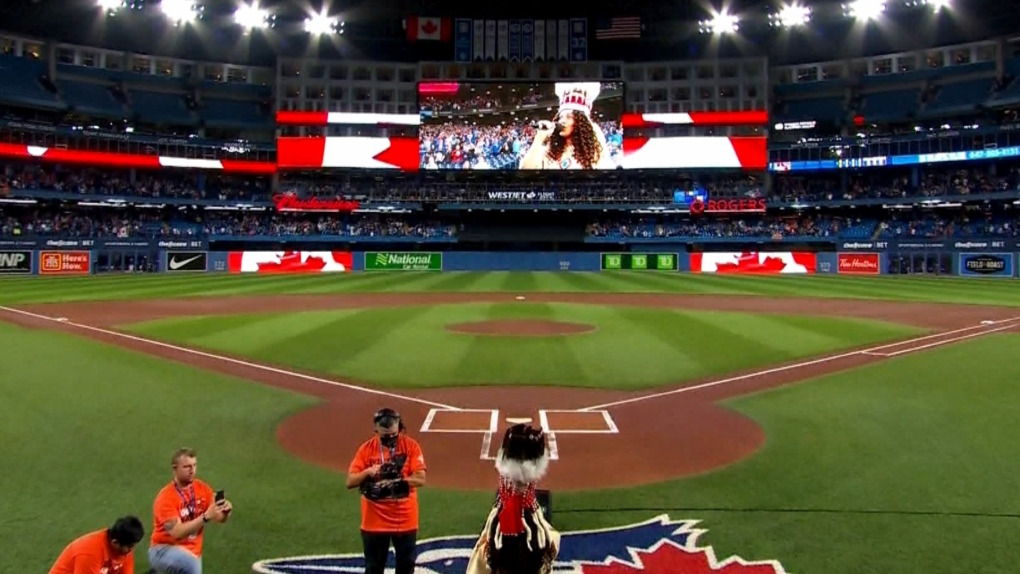 Friday marked the National Day for Truth and Reconciliation across Canada.

Marule says being able to perform on a national level, while raising awareness of those who attended residential schools, made the day extra special for her.

“The Blue Jays wanted to have somebody represent an Indigenous tribe for Truth and Reconciliation Day,” Marule told CTV News.

“Because of what this day means, I have aunts, uncles and relatives that all attended residential schools, so I’m very aware of the fallout from that experience for them and our community.

“It’s very moving that the Blue Jays are doing such a presentation to honour this day. I think it puts a lot of emphasis on this day.”

A teacher at Red Crow Community College in Stand Off, Alta., Marule began singing when she was in high school.

“After going to the U of L and when I was first teaching out of university, I was teaching on the Blood Reserve at an elementary school and it was a Blackfoot immersion program and the Blackfoot immersion teacher asked me if I could teach her Grade 4 students to sing O Canada in Blackfoot for their end-of-the-year presentation,” she said.

“Ever since then, I’ve been asked to sing O Canada at various places in Blackfoot, so I’m really grateful for her.”

The chance to sing at a Toronto Blue Jays game came earlier this summer when Marule was visiting Edmonton.

“I was in Edmonton this summer and I got a phone call from a fellow who said he was with the Blue Jays and was wanting to know if I would be willing to come to Toronto to sing the national anthem at one of their games,” she said.

“At first, I thought he was joking and I said ‘yeah sure’ and at the beginning of September they confirmed the date and they wanted me to come out because today is Truth and Reconciliation Day.”

Marule says the support leading up to her big moment has been unbelievable.

“I’m really proud of where I come from and I’m really excited to be representing our tribe, Lethbridge and Alberta today.”

The holiday toys catching the eyes of industry watchers

Authorities in China's western Xinjiang region opened up some neighborhoods in the capital of Urumqi on Saturday after residents held extraordinary late-night demonstrations against the city's draconian 'zero-COVID' lockdown that had lasted more than three months.

Iran's supreme leader praised paramilitary volunteers tasked with quashing dissent on Saturday in a televised address as dozens of eye doctors warned that a rising number of demonstrators have been blinded by security forces during anti-government protests.