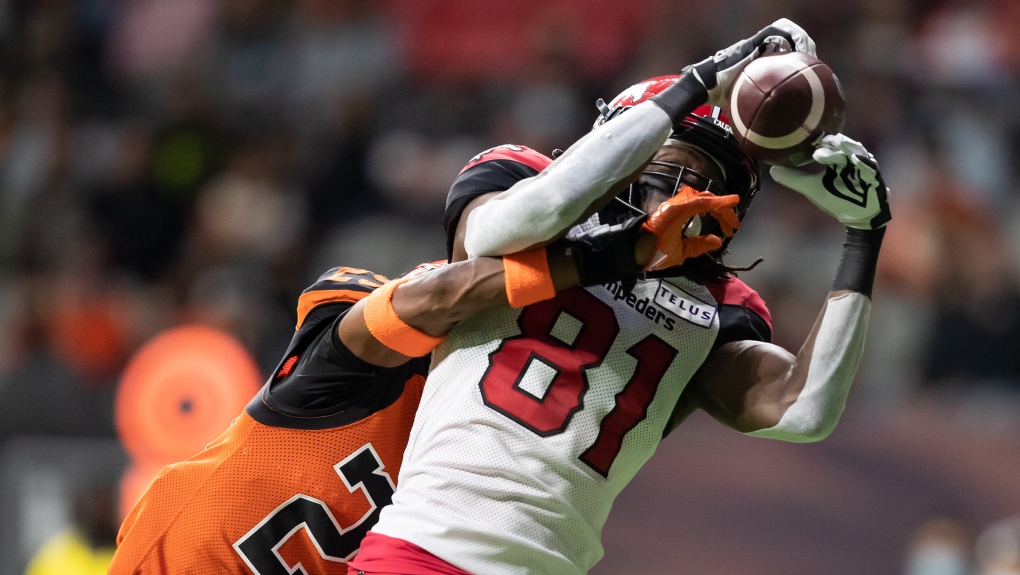 Calgary Stampeders' Luther Hakunavanhu (81) makes a touchdown reception as B.C. Lions' Jalon Edwards-Cooper defends during the first half of a CFL football game in Vancouver, on Saturday, October 16, 2021. (THE CANADIAN PRESS/Darryl Dyck)
VANCOUVER -

It was win by committee for the Calgary Stampeders on Saturday night.

Quarterback Bo Levi Mitchell connected with nine different receivers and the Stamps got touchdowns from the offence, defence and special teams in a 39-10 victory over the B.C. Lions.

“The best thing is it was a bunch of guys nobody knows what their names are stepping up and making plays,” said Calgary Head Coach Dave Dickenson. “There's still a lot to clean up.

“But what I'm seeing is our team's competing, we're fighting, we're showing up with more confidence and that's why we're getting better results.”

Mitchell finished 22-of-32 passing for 270 yards and a touchdown while kicker Renee Paredes had six field goals for the Stampeders (5-5).

“You can see we're feeding off of each other, not just as an offence, but offence, defence, special teams,” Mitchell said. “It's what I thought was our most complete game yet. And that's scary. The thing is, it doesn't guarantee we're going to play like that next week.”

The play set up an 18-yard field goal by Paredes.

Fans began streaming towards the exits with five minutes left on the game clock after Calgary's Jonathan Moxey picked off a high, arcing Michael Reilly pass and sprinted 53 yards into the end zone to put Calgary up 39-10 following Paredes' convert.

B.C. appeared poised to get its second touchdown of the night with just under 90 seconds to go. But backup quarterback Nathan Rourke's pass sailed wide of Shaq Johnson in the end zone and the Lions instead turned the ball over on downs.

Reilly was 13-of-25 passing for 145 yards while being sacked three times.

“I thought that was one of my more poor performances I've had,” Reilly said. “I just didn't get it going. I've got to certainly be better.

“I thought there was some stuff that we did well, that we had been working on trying to improve â€¦ but I didn't get the job done.”

Rourke threw for 115 yards for the Lions (4-5), who suffered their third-straight loss. They're 1-4 at home and 1-5 against divisional opponents.

“We're frustrated,” said Lions Head Coach Rick Campbell. “I think we can play better. I have seen it in action.

“We can compete better. There is an energy missing. I'm surprised because we had a really good week of practice. Our guys were into it. We're just going to have to find ways to improve and compete better in games.”

The Lions started off strong Saturday, with Reilly finding Bryan Burnham along the sidelines for a 43-yard gain 5:20 into the first. Rourke scored on a one-yard run to give B.C. an early 6-0 lead.

It was the York University product's first-ever CFL touchdown.

“It was amazing,” Hakunavanhu said. “Just to even get the opportunity, I'm very thankful for it. Very happy.”

The Stampeders went up 7-6 after Paredes' convert and they never relinquished the lead.

The second quarter saw the visitors repeatedly muscle their way into Lions' territory and into field goal position.

Paredes made three field goals across the frame, including a 42-yard strike.

B.C.'s best chance of the second came when Anthony Cioffi forced a fumble by taking down Nick Holley midfield. Lions safety Marcus Sayles picked up the ball and streaked across the field, only to see his team called for a 15-yard illegal block penalty.

Calgary took a 16-6 lead into the half after B.C.'s offence sputtered, then stalled.

Things went from bad to worse for the Lions at the beginning of the third as Stampeders running back Roc Thomas dodged and weaved his way across the turf for a 101-yard kickoff return TD.

B.C. finally had a chance to put points on the board again 3:53 into the half with a 30-yard field goal attempt. But Jimmy Camacho's kick sailed wide before bouncing out of bounds for the single.

Minutes later, Paredes hit his fourth field goal, this one from 45 yards out, to put Calgary ahead 26-7.

Camacho finally nudged the Lions into double digits with a 28-yard field goal with 1:43 left in the third.

A 28-yard field goal by Paredes gave the Stampeders a comfortable 29-10 lead to start the fourth.

The win was Calgary's third straight, following consecutive wins over the Saskatchewan Roughriders. The Stampeders moved into third in the West Division while B.C. now sits in fourth with a game in hand.

Calgary's success follows a sluggish 1-4 start to the season.

Dickenson said his team has become more accountable to one another since taking their meetings off-line.

“Football's just too big of a team game to do it on Zoom meetings so we felt that we had to make the change to get the job done,” he said. “So the play is better, the camaraderie is better.

“I think, honestly, the effort has always been there, now the performance is up. I do believe it's a lot in part to having accountability in a room, with your coach staring at your and knowing what's expected.”

The Stampeders are used to getting off to hot starts each season, said Mitchell, who's in his ninth year with the team.

This campaign has been a little more difficult, with Mitchell suffering a broken leg early and struggling to find his form upon returning.

“First round of the fight, we got punched in the face (this season). And, man, we responded,” Mitchell said. “I think it's fun to see. I think we've just got to keep building.”

Calgary hosts Saskatchewan next Saturday for the conclusion of a three-game season series. The beleaguered Lions will face another tough test the same night as they take on the league-leading Blue Bombers in Winnipeg.

This report by The Canadian Press was first published Oct. 16, 2021