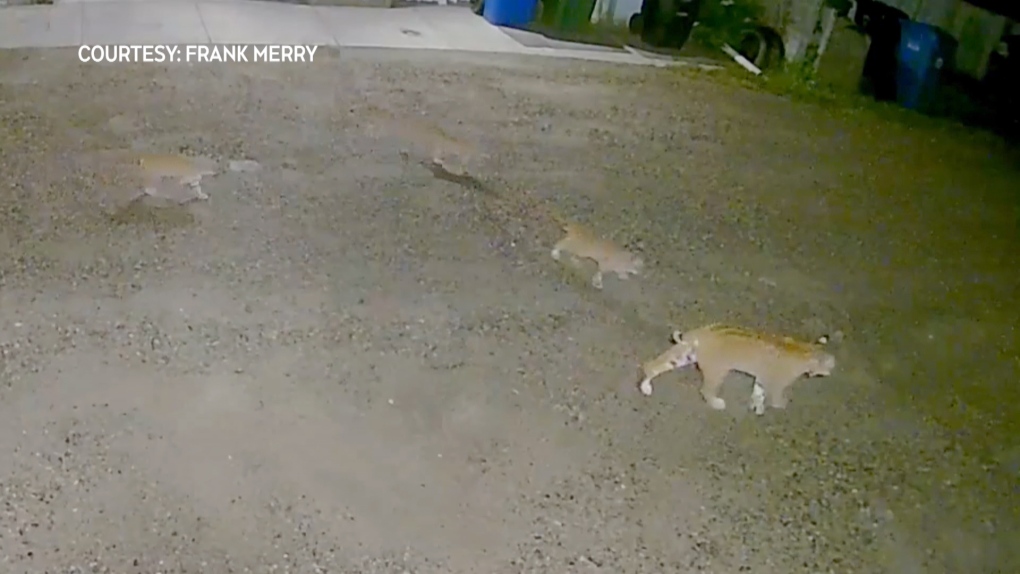 A family of bobcats has been spotted living in the Killarney area, which is making some residents nervous. (Contributed)
CALGARY -

A family living in the southwest community of Killarney say they are concerned about a family of bobcats that have taken up residence in their neighbourhood.

Jason Hastie has lived in in area for the last 16 years and says this is the first time he's seen wildlife in the inner-city.

The cats were first noticed about a week ago, when Hastie's Ring doorbell camera picked up motion. His wife checked it out, and saw the bobcats.

The animals can be bold, he says, which adds to the concern.

"Our cat was sitting at the window, his fur got big and he started growling, so he obviously wasn't very happy," he said.

"But I think he wouldn’t fare very well compared to the bobcats."

The cats have made their way onto the family's back deck, and weren't scared off when Hastie banged on the window.

"We’ve got two young kids, (age) four and seven, with them playing outside, a bit worried what could happen," he said.

They've asked the city to remove the animals, but were told there isn't much that can be done.

"Fish and Wildlife officers receive many reports of bobcat sightings each year. Officers will respond when there is a threat to public safety," read an emailed statement from the province.

"Bobcats are common in Calgary, where they feed mostly on rabbits, hares and other small mammals like mice and squirrels. When recreating outdoors, it is always a good idea to be aware of your surroundings and watch for urban wildlife, such as bobcats, coyotes and moose. While bobcats are generally not a threat to people, we would encourage people not to approach them and to give them plenty of space."

A wildlife map is available, showing where animals live and travel in Calgary.

Wildife encounters can be reported by calling 310-0000 or the 24-hour Report a Poacher line at 1-800-642-3800, which is monitored and Fish and Wildlife officers will respond as appropriate.