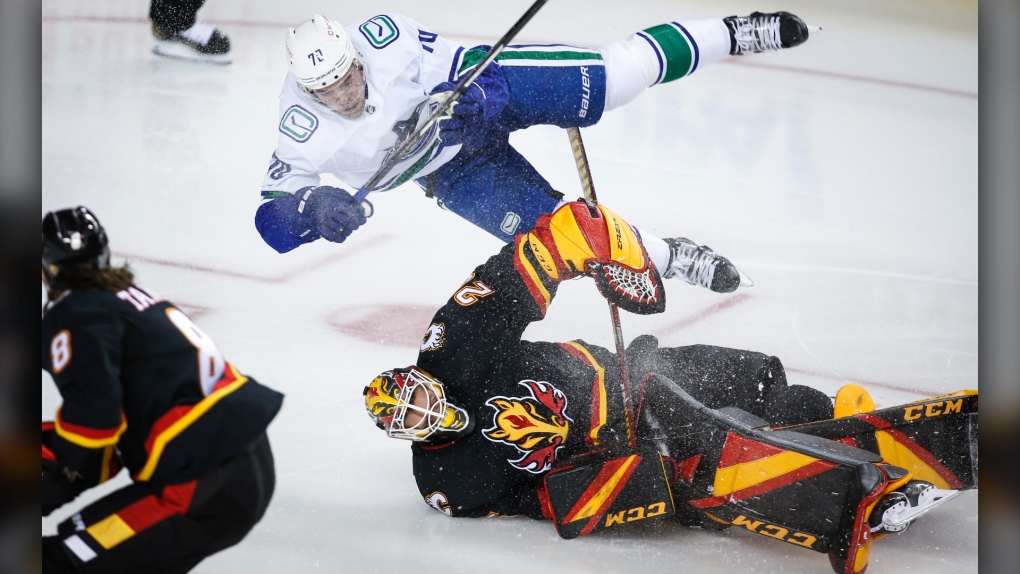 Brock Boeser had a goal and two assists for Vancouver (8-11-1), with Bo Horvat and J.T Miller each contributing a goal and an assist to the victory.

"I like to score when our team's winning," Boeser said. "It feels so much better when you do that.

"Just for our team to play a complete game tonight, it's huge for us."

Defenceman Jordie Benn and Nate Schmidt also scored for the Canucks, who improved to 2-3-1 versus the Flames this season.

Goaltender Braden Holtby stopped 35-of-36 shots in his eighth start and first win since Jan. 28.

Andrew Mangiapane scored for Calgary (8-7-1). Markstrom stopped 24 shots in his seventh straight start and 14th of Calgary's 16 games this season.

After allowing five goals on 29 shots, the former Canuck was replaced by David Rittich near the eight-minute mark of the third period.

Markstrom denied feeling fatigued by his workload, but the Swede couldn't compensate for several defensive breakdowns by the Flames.

He was also involved in a pair of second-period collisions with Canucks.

"It's nice to get rewarded for the chances we had tonight," Horvat said. "Marky stood on his head a lot against us.

"To finally put a couple past him and get rewarded for a lot of our hard work and our chances tonight, it definitely gives our group confidence."

Wednesday's game was the fourth in a row between the two clubs. The Flames went 2-1 in Vancouver's Rogers Arena before the series shifted to Scotiabank Saddledome.

Boeser scored on a Canucks 4-on-1 at 5:54 of the third period. The winger lasered a high shot over Markstrom's glove for his 15th point and eighth goal in his last 11 games.

Calgary drew within one at 18:13 of the second period, but Vancouver pulled away again scoring twice in the final 78 seconds.

Vancouver's pressure around Calgary's net produced multiple chances for Schmidt to bang in a rebound at 19:06. Miller put a shot off the crossbar and in at 18:28.

Calgary's Mangiapane drove in from the wing and dragged the puck in front of a sprawling Holtby to score on a sharp-angled shot at 18:13.

Markstrom charged out of Calgary's net to challenge Horvat streaking up the middle, but the goalie was too late to cut off the angle.

Horvat got a shot away as the players made contact for a 2-0 Vancouver lead at 7:37 of the second period.

Markstrom also left his crease in the first minute of the period for a poke check on Vancouver's Tanner Pearson in full stride. The two men collided hard near the face-off circle.

"It's pretty clear obviously I had no business going out on either one of them," Markstrom said. "One, you know, I got lucky enough to get hit on my pad with the puck. And the other they scored.

"You want to help the team win and stop pucks and not to give goals away like that. It's frustrating when you're helping the other team instead of helping your own team."

The Flames have led after the first period in just five of their 16 games this season. Head coach Geoff Ward was frustrated by his team's inconsistency.

"It's time to put this thing to bed, take charge and take control of what we can," Ward said.

"All those things are certainly within our control."

Benn scored his first of the season at 1:46 of the first period off a neutral-zone turnover by Calgary's Dominik Simon.

Horvat faked a shot and fed Benn in the slot to beat Markstrom's glove.

The Flames take on the Oilers in a back-to-back games on Friday at home and Saturday in Edmonton.

The Canucks are at home to the Winnipeg Jets on Friday and Sunday.

Notes: Flames centre Mikael Backlund was back in the lineup after sitting out Monday's 4-3 overtime win in Vancouver with a lower-body injury . . . Horvat has 13 points (7-6) in his last 16 games.

This report by The Canadian Press was first published Feb. 17, 2021.