Police were forced to evacuate the Calgary Courts Centre on Wednesday after a suspicious package was identified by a sheriff during routine screening.

Emergency crews were called to the building at 601, 5 Street S.W. at around 9 a.m. on Wednesday morning.

Tactical officers and bomb technicians were sent in to examine the package after police were notified by sheriffs.

"When we arrived, we spoke to the sheriffs and they had indicated that a gentleman came to the court building, we don't know why, what purpose he had to be at the court building, had a bag with him. When they put the bag through the screening device, there was a suspicious item located in the bag. Some initial interviews were done with this gentleman, there's some inconsistency with what was being said, enough that the sheriff took this gentleman into custody. The package remained in the screening device, the police service was called  and the picture was shared with our tactical unit members, there was enough of a concern, just based on the photo only, that the recommendation was that we evacuate the court building," said CPS Spokesperson, Kevin Brookwell.

Roads in the immediate area were closed to all forms of traffic and the building was evacuated.

The bomb robot was deployed and safely removed the package to a containment unit on the street.

Roads in the area were reopened to traffic and bus and CTrain service was restored to the downtown just after 1:00 p.m.

Police say they are still interviewing the person who was taken into custody when the package was discovered.

“We’re still interviewing the suspect,” said Brookwell. “What I can tell you is that in the Marlborough Mall parking lot area we have a vehicle that we believe may be associated to this particular incident, that vehicle has also been cordoned off and we haven’t done anything yet with that vehicle.”

Brookwell says they will know more once the tactical unit has examined the device and that they will take the investigation from there.

"We don't know what the conection is yet to this individual but we do believe the vehicle is associated to this mattter," said Brookwell. "They're taking the precautions they need in the event that there is something in that vehicle but we don't know."

Police say that they don't know why the person was at the courthouse and that they are working to put all the pieces together.

"At this point we have someone in our custody for investigative reasons, we're talking to him. We have this device and we're going to try and determine what it is and  we have a vehicle that we think is involved, so a lot of unanswered questions and we hope to get those questions answered as soon as we can," said Brookwell.

Police say they will have to determine what was in the package before they can consult with The Crown to discuss whether charges will be laid.

The courthouse was closed for most of the day and was reopened late in the afternoon.

Officials say those people who were scheduled for a court appearance on May 1 and were affected by the closure are required to appear at 9:00 a.m. on Thursday, May 2. They are asking those individuals to check the front display monitors to determine whcih court room they will be in. 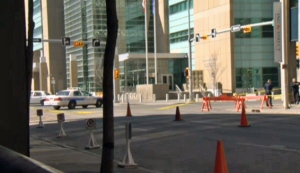