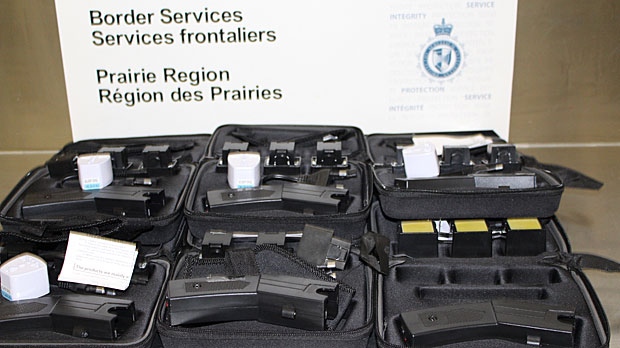 CSBA agents and the RCMP have arrested a man after he ordered a number of illegal energy weapons from China. (Supplied)

Members of the Canada Border Services Agency and RCMP have arrested an Airdrie man in connection with a seizure of a number of weapons that are illegal to use in Canada.

The CBSA says that on July 10, they intercepted a parcel from Hong Kong that was declared as ‘flashlights’, but upon further investigation it was discovered that they were actually conducted energy weapons, similar to a Taser.

That information was forwarded to the Airdrie RCMP’s Crime Reduction Unit and a warrant was issued for the arrest of Jeffrey Gordon Bussey, 38.

A subsequent search of a rural property near the community turned up more weapons and evidence, including a pistol and a switchblade.

The RCMP says that the seizure is an example of how they are working to keep people from bringing illegal weapons into the community.

“The RCMP and CBSA will not allow that to happen. Our focus in CRU is to proactively target drug, property, and weapons crime. If you choose to commit those crimes in Airdrie or Rocky View County, you can expect that you will attract the attention of the Crime Reduction Unit," said Sergeant Andrew Boxall with the Airdrie RCMP Crime Reduction Unit in a release.

Bussey has been charged with seven Criminal Code charges as a result of the investigation and is expected to appear in Airdrie Provincial Court on August 16.