Residents in a community outside Calgary are looking for solutions for a trio of bear cubs whose mother had to be euthanized last month.

A black bear was shot and killed by officers from Alberta Environment and Parks on Aug. 28 in Bragg Creek, after it got into a resident’s garbage.

It had three seven to eight-month-old cubs with her that have now been left orphaned.

Resident Ania Bergmann says the bear had recently broken into a shed stored with grain, but is concerned now that the cubs are now without a mom.

“They (fish and wildlife officers) wanted to shoot the three cubs, however a number of neighbours got involved and advocated for the cubs and as a result of that, the cubs were left alive and now they are wandering around the area,” said Bergmann.

Bergmann fears that officers will eventually shoot the cubs, due to the close proximity they have had with humans.

On Wednesday, Bergmann along with others, plan on holding a public meeting at Bragg Creek Provincial Park on how best to address bears and human contact moving forward.

“Spread the knowledge and spread the word about bear safety and bear awareness,” she said.

“In addition to that, have an open discussion about how bears are treated when they come into contact with humans. What are the options for their potential rehabilitation?”

Bergmann adds that she would like to see the cubs relocated and taken to a wildlife rehabilitation institution, similar to the Cochrane Ecological Institute (CEI). 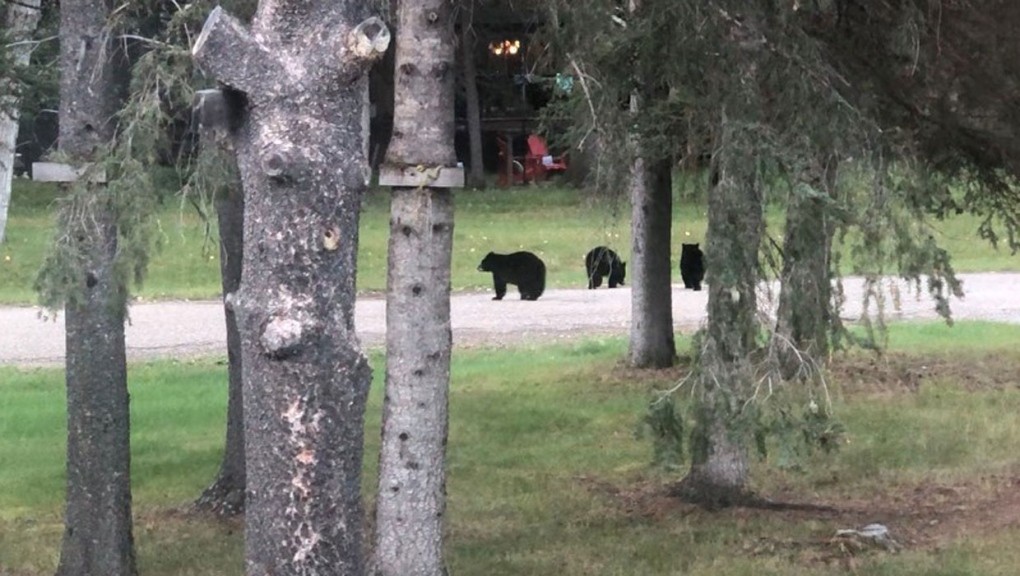 A statement issued by Alberta Environment and Parks says that wildlife enforcement officers will “continue to monitor the three cubs.”

“If the cubs are located, Fish and Wildlife will make a decision for both the benefit of the bears and public safety,” said spokesperson Hayley Martin.

“Orphaned black bear rehabilitation is not considered necessary in this case as the cubs are old enough to be able to forage on their own.”

Martin adds that “this is an unfortunate situation caused by human actions.”

“Leaving unsecured garbage, which became an attractant for bears actively foraging this time of year to accumulate fat stores for winter,” she said.

“We encourage Albertans to take precautions and secure any attractants when living or recreating in bear country, to protect themselves and Alberta's bears.”

Martin adds that relocation is not an intervention that is needed.

“The best option is always to leave animals in the wild whenever possible,” she said.

“Research on wildlife rehabilitation indicates that human intervention is likely to cause greater harm to these cubs based on their age.”

Martin says that CEI is not able to rehabilitate black bears after their license was pulled last year.

“This decision has been extended to the 2022-23 fiscal year, since the issue is still before the courts. CEI is still able to continue to rehabilitate other wildlife.”

Conservation biologist Lisa Dahlseide says the officer was following the protocol with shooting the sow, but she does not agree with it.

She says she’d like to see the cubs rehabilitated.

“If we can adopt procedures in place that can support the viable bear population, I believe the communities would rather have that,” she said.

Dahlseide adds that other provinces can rehabilitate black bears and suggests Alberta should give more wildlife institutes the opportunity to do the same.

“We see that they accept over 80 cubs annually at their rehab facilities – why does Alberta only have three?” said Dahlseide.

“It begs that question, what happened to all these orphans?”

Alberta is home to 40,000 black bears and 10,000 cubs are born every year here. Approximately 3,500 of them will die from natural causes before they reach one year of age.

AEP says it is estimated that 30 percent of male cubs will survive to the age of five years old in the wild.

The Alberta government says although black bear cubs normally remain with their mothers for up to 17 months, they are self-sufficient at five months.

The public meeting will begin at 6 p.m.

The Senate passed bipartisan legislation Tuesday to protect same-sex marriages, an extraordinary sign of shifting national politics on the issue and a measure of relief for the hundreds of thousands of same-sex couples who have married since the Supreme Court's 2015 decision that legalized gay marriage nationwide.