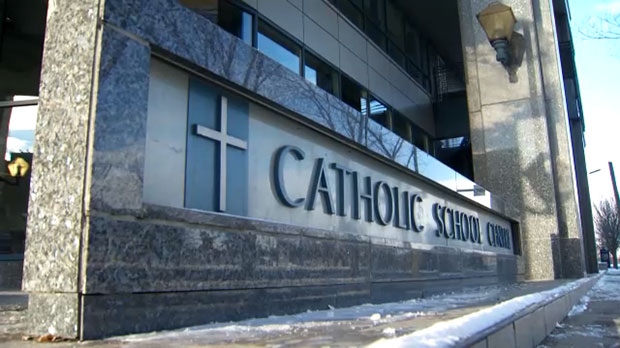 The Calgary Catholic School District is asking the province for more money so it can build more schools. (File)

CALGARY -- The city's second-largest school board has gone to the province with its hat in its hand to try and ease the burden on its crowded buildings.

The Calgary Catholic School District (CCSD) says many of the schools in its network are at or over capacity but it doesn't have the capital to expand.

One such school, St. Martin de Porres in Airdrie, the only Catholic high school in that community, is currently sitting at 104 per cent of its capacity for students.

Because of the crunch, the CCSD has asked the province to pitch in.

"They're bursting at the seams," said Mary Martin, chair of the CCSD's board of trustees. "When you're getting to that capacity, you're really starting to impact the quality of education you can offer."

She added the CCSD has received proportionately less funding than other school boards in both Calgary and Edmonton.

Instead, Martin wants to see more money allocated in the upcoming provincial budget.

Furthermore, it said the CCSD has recently completed two major high school projects: the new All Saints High School which opened in September 2018 and the modernization of St. Francis High School in April 2020.

It says there is a defined process by which each Alberta school board must abide by when it comes to building schools and upgrading others.

"Each year, school boards are required to submit three-year capital plans to Alberta Education that outline their capital needs," said Justin Marshall, press secretary for Education Minister Adriana LaGrange, in an email. "These plans are then used to develop the provincial capital plan. Education, with support from Infrastructure, prepares a list of the highest priority projects. These are considered and prioritized based on evaluation criteria under the categories of: health and safety, enrolment pressures, building conditions, functionality and programming, and legal requirements."

While the full list of school projects for the 2021-2024 capital plan will be released after the UCP government's budget in the spring, Marshall says the CCSD's submission does not include a new high school as one of their top five priorities.

The CCSD administers 118 schools and more than 56,000 students in Calgary, Airdrie, Cochrane and Chestermere.