Calgarian recounts shooting outside his home that left him paralyzed 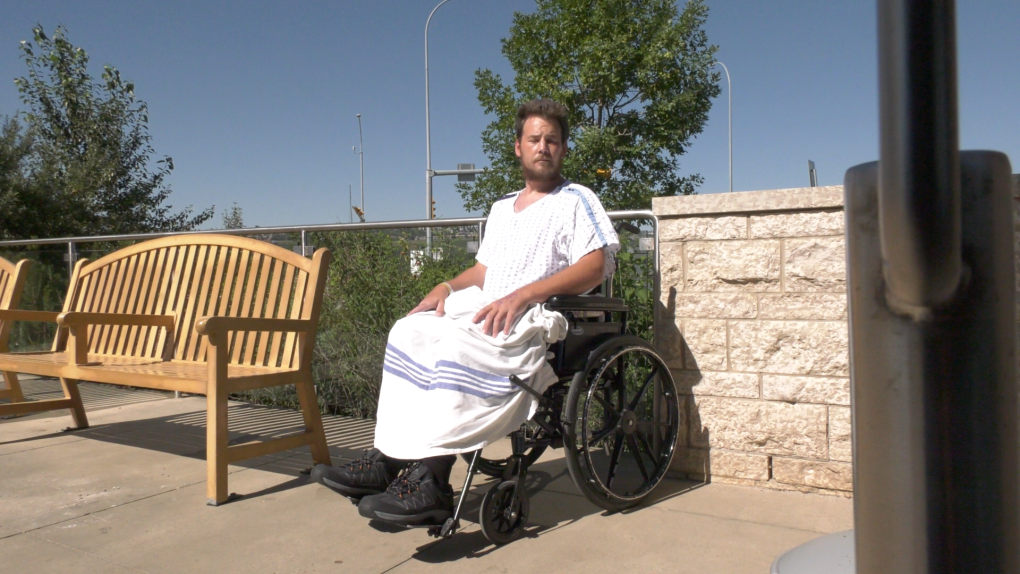 Nick Langridge is recovering at the Foothills Medical Centre after a July 4 shooting outside his southeast home left him paralyzed.
CALGARY -

Nick Langridge is recovering in a Calgary hospital after being shot in the back while confronting a stranger near his southeast home last month.

Langridge says he was getting ready for bed in the early morning hours of July 4 when he heard a loud bang from a transformer and the power went out inside his residence in the Oasis Mobile Home Park.

"I went outside just to see if anything was up," recounted Langridge, "Shortly after, the suspect came into the alleyway and entered the trailer park."

Langridge says there was a second loud bang in the nearby intersection before he saw the man. His initial thought was the man, who he did not recognize from the trailer park, was car prowling as it was 4 a.m.

Langridge confronted the man and the man took off. A foot chase ensued and Langridge quickly gained ground.

"I caught up to him and grabbed him by the back. Before I could even stop and turn around, he must have had his hand on the gun already, took that first shot and hit me in the spine."

The shooting victim was transported by ambulance from the 2100 block of 50th Street S.E to the Foothills Medical Centre in critical condition.

The suspect was located on scene and, according to police, transported to hospital for treatment of his own gunshot wound. Investigators say the confrontation between Langridge and the suspect occurred a short time after a single vehicle crash in the vicinity that occurred after officers spotted a vehicle speeding near the intersection of Fifth Avenue and 52nd Street S.E. and elected not to pursue due to the dangerous nature of the driving.

Jason Marc Leduc, 19, has been charged with two counts of attempted murder as well as drug, dangerous driving and firearms-related charges. Leduc also faces charges in connection with a December 2020 shooting in the southeast neighbourhood of Cranston that left a man critically injured.

Langridge is now paralyzed from the waist down. He has four cracked vertebrae and it appears that he will have permanent paralysis.

"Its something that I’ve been dealing with alright. My oldest brother Mike is in an electric wheel chair, he’s been a huge mental support through this, just knowing that people can undergo these situations and still carry on to live a very positive life."

Langridge is staying positive through his recovery and plans to live his life the way he had before, with a goal of returning to being self-employed as a commercial flooring installer.

"That’s my plan, I want to get back to work, keep paying my bills myself. Get my van converted so I can keep driving, keep living my life how I was essentially."

Langridge's home needs massive renovations to make it more accessible for him and a GoFundMe campaign has been started to help ease some of the financial stress.

"My brother did set up a GoFundMe and I definitely have to express my gratitude to everybody that’s taken part in that, I can't believe the generosity, honestly."