Calgarian speaks out after puppy gets cannabis poisoning after park walk

Calgarian speaks out after puppy gets cannabis poisoning after park walk

A Calgary woman is urging others to be extra cautious while walking their dogs after her seven-month-old Bichon Shih Tzu got cannabis poisoning after a walk in a public park.

Marlene D'Aoust says her dog Vienna became noticeably ill on July 18, shortly after a walk on the Bow River Pathway on the western edge of Lynwood.

The dog had crossed eyes, off-balance walking and was trembling.

She took Vienna to a nearby animal hospital where she was treated overnight.

Discharge documents confirm Vienna had an unsteady gait and say her urine test was positive for Tetrahydrocannabinol (THC), the psychoactive compound of cannabis.

D'Aoust does not consume cannabis and doesn't keep any at home. She believes Vienna must have consumed a marijuana product that was tossed or dropped along the river pathway during their walk.

Vienna has since fully recovered, and D'Aoust now puts a muzzle on her while out for walks.

D'Aoust says she's sharing details of her scary experience for the sake of other dog owners.

"It's something you just don't think about when going for a walk in your park," she said.

"Perhaps if someone had talked about it, I would have been way more aware." 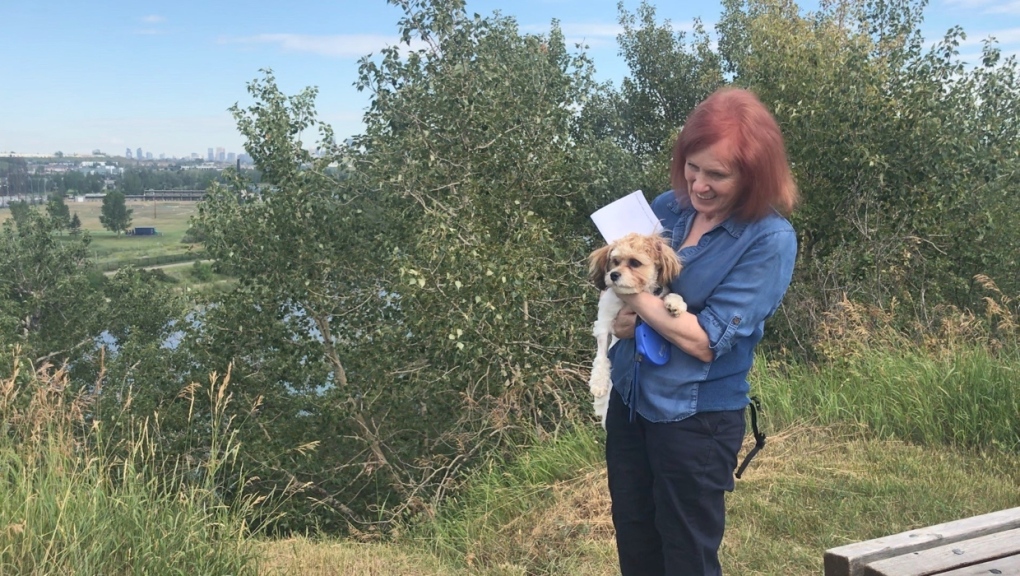 Marlene D'Aoust said her dog Vienna became noticeably ill on July 18.
An instructor at the University of Calgary's Faculty of Veterinary medicine says cannabis poisoning can be fatal to animals if left untreated.

"We know that dogs do have more cannabinoid receptors in their brains than humans do so," said Dr. Rebecca Jackson, an small animal clinical instructor.

"Even a small amount of cannabis can be a toxin for a dog," she said.

"In severe cases, it can actually lead to neurological problems like seizures, coma and even death (if the dog consumes) large amounts."

Jackson says she has noticed anecdotally that during her clinical practise, more dog-owners are coming forward with concerns of cannabis toxicosis.

The federal government legalized cannabis in 2018.

"The positive thing for me as a clinician is that owners are telling me. Prior to legalization, you would be trying to get that information form the owner and they wouldn't be forthcoming, whereas now they say 'yes.'"

POISONINGS ON THE RISE

Researchers from the University of Guelph published a paper in April that found an increase in canine-cannabis poisoning since legalization in Canada and some states in the US.

The research included 200 vet clinics across North America, (191 in Canada) with self-reported results over a three month span in 2021.

"The uptick is not necessarily the result of humans increasing their use of cannabis but could reflect more reporting to veterinarians when animals are exposed (since legalization)," said Dr. Jibran Khokhar, lead researcher and professor at Ontario Veterinary College, in a news release.

His research found edibles were often the most common cause of the toxicosis, but many pet-owners also reported not knowing where the animals came into contact with the cannabis.

The vice-president of medical operations at the VCA Animal Hospital in Calgary has also published studies looking at canine cannabis poisoning post-legalization.

His research found that there were similar rates in the years leading up to 2018 and afterward, but the owners were more likely to confirm opening the dog had consumed cannabis after legalization.

"Certainly now we hear more clients that walk in and say my dog got marijuana whereas five years ago you had to work it out of them," said Dr. Danny Joffe.

He says his centre sees up to three cannabis poison cases per month, and similar centres report similar occurrences.

Joffe says it's too frequent, because it's a preventable emergency.

"We should have things that are toxic locked up somewhere the dogs and kids can't get it," said Joffe.

As for the concern about cannabis found in public areas like parks, the City of Calgary has littering bylaws that cover the improper disposal of burning materials, includes cigarette butts and parts from marijuana.