CALGARY -- With temperatures expecting to launch into the high 20s later this week, Sunday saw thousands out enjoying the sunshine at Prince’s Island Park.

With e-scooters back in the city, many took full advantage while others walked and enjoyed the river pathways.

As of Tuesday, Alberta will enter Stage 1 of its summer reopen plan.

Stage 1 was permitted to begin two weeks after half of Albertans 12 years of age and older have received at least one dose and hospitalizations are below 800 and declining.

Under the guidelines, outdoor social gatherings and physical activities of up to 10 people can take place. Indoor get-togethers are still forbidden.

Beauty and hair salons can reopen by appointment only, while funerals can have 20 people, weddings with 10.

Minor sports will not return to full competition until Stage 2, which is expected to start on June 10. 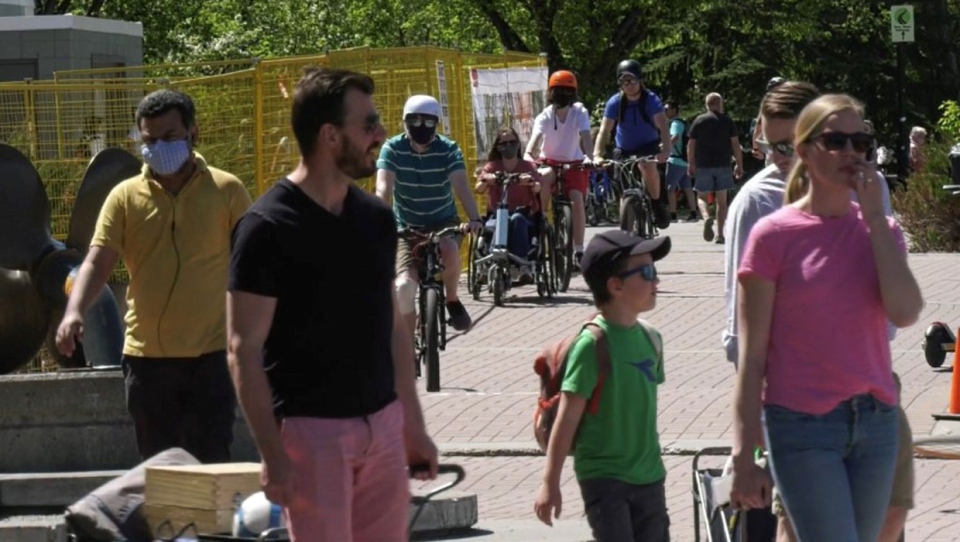 For Calgary’s minor soccer community, the phased-in approach will allow its teams and leagues to form a condensed season.

“Since about mid-February, CMSA has been planning a quick-start strategy that gets us up and rolling in 14 days,” says Jordan Stewart, technical leader with the Calgary Minor Soccer Association.

Stewart says CMSA is targeting June 15 as the start of its season with registration underway.

“Parents, players, officials, coaches are all incredibly excited to get going,” he said.

“I mean the excitement is palpable in the air. We talk to our clubs and they are over the moon that we can get back out onto the pitch.”

Stage 2 can commence two weeks after 60 percent of Albertans born in 2009 or earlier have received at least one dose, and hospitalizations are below 500 and declining.

As of Saturday, both of these targets have been already been met.